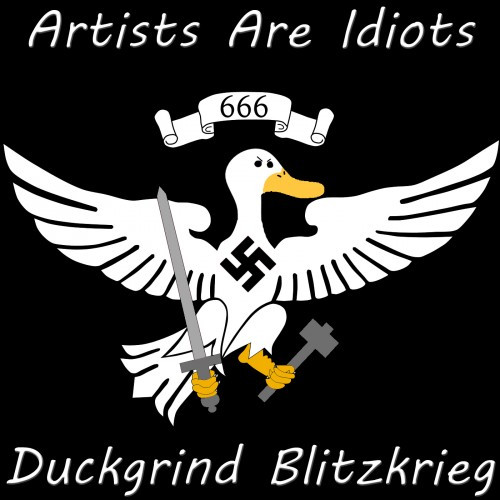 (We are delighted, and slightly queasy, to welcome Phro back to NCS with a story that was spawned by some new duckgrind from Finland’s Artists Are Idiots.)

Phro’s note: There is more duckgrind to be had. You can skip the story and go right to the music at the end if you want. No one will know and no one will blame you. Artists Are Idiots can be liked, messaged, poked, molested, and cock-rubbed on Facebook. Their music is available on bandcamp at a reasonable price. This is a video about animal penises.

The reporter walked through the hastily erected hospital tents with a hand over her mouth, attempting to hold down her lunch of bacon and fried duck vaginas (“We eat what we kill,” her escort had told her). All around her, victims of the war moaned in agony. Ears bitten off, hair stained with duck shit, eyes punctured by projectile corkscrew cocks, and noses filled with duck cum. Staring blankly into the roof the tent, squeezing a teddy bear to his chest, a child not more than 12 whispered to himself. The reporter swore she heard the words “duckgrind blitzkrieg,” but surely, she told herself, she had misheard him. Such mercilessness was unimaginable, even for the avian enemy. END_OF_DOCUMENT_TOKEN_TO_BE_REPLACED 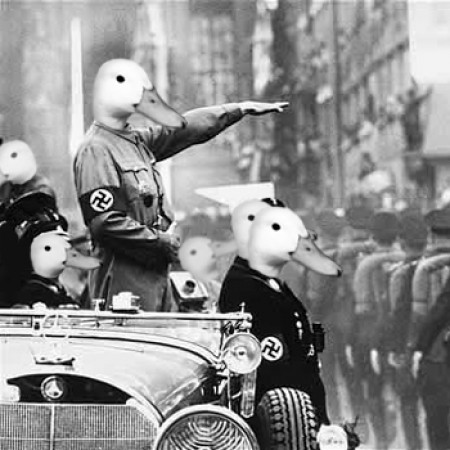 (Our Blog Break is now over, and what better way to get things back to (ab)normal here at NCS than with a review by Phro of the debut EP by a Finnish “duckgrind” band — Artists Are Idiots. The album is entitled The Subduck Scum Shall Fall.)

Islander sent me this band to check out. I pretty much blew every load I had just based on the name and then dry-came until my balls were bloody. I can’t guarantee you’ll like their music, but only because I can’t guarantee that you’re not a brain-dead jackal.

The cell is dark. It smells of feathers and feces. Naziduck shit has a particularly revolting aroma to it, and they know it. Which is why they always, inevitably, shit on their prisoners during interrogation. They want you to stink of their shit to remind you exactly who you belong to.

But I’m still shit free. I wonder for how long.

In the background, I hear the oddly jovial sound of a brass band taking up their instruments. It’s confusingly cheerful. But who knows if Naziducks can smile? They don’t even have fucking lips. That thought reminds me of the Anti-Naziduck commercials they show before each film at the old dime cinema. It’s always the same. An image of regular ducks flapping about a farm yard at first dashing between cow hooves and mindless chickens. Then, without warning, the next morning the farmer awakes to find the chickens have all be killed in the night, along with the cow, and the ducks are digging mass graves. The farmer turns to run to get his shotgun, but it’s too late. The drakes set upon him, tearing his clothes off, taking turns shoving their long, twirling, rapid-fire erections into his brain via his nasal cavity. “Naziducks: Are They In YOUR Barnyard?” the commercial demands before the movie starts. END_OF_DOCUMENT_TOKEN_TO_BE_REPLACED