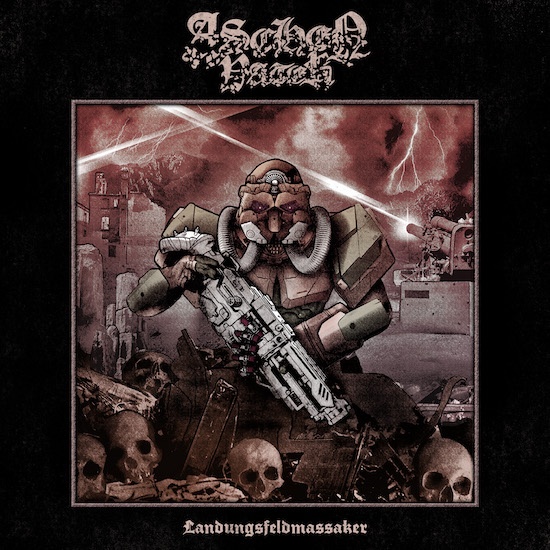 “The band name ‘Aschenvater‘ is inspired by the universe of Warhammer 40K. The sound is raw and destructive, like the rotting battlefields of the drop site massacre. Oldschool Death Metal is the perfect way for us to bring the content and the energy of the lyrics together with the music. The HM-2 is sculpting the violence and brutality of the fights in clay”.

This is how this German death metal trio introduce themselves, along with references to the inspirations of Bolt Thrower and Hail of Bullets. And to underscore the influence of Warhammer 40K, they named their debut EP Landungsfeldmassaker, in memory of a battle on Istvaan V, the “drop site massacre” as rendered in German, which is the language used for all the EP’s lyrics.

But when you listen to the EP’s seven songs you’ll come away convinced that this is no game, but is instead a viscerally powerful rendering of the mayhem, the bloodshed, and the desolating misery that plagues all human warzones. The grooves in the music are often massive and the riffing often highly infectious, but the overarching atmosphere of the EP is one of shattering decimaton and soul-crushing hopelessness.

And today we invite you to experience all of that for yourselves via our premiere of a complete stream of Landungsfeldmassaker in advance of its April 30 release (tomorrow!) by Dead Center Productions. END_OF_DOCUMENT_TOKEN_TO_BE_REPLACED