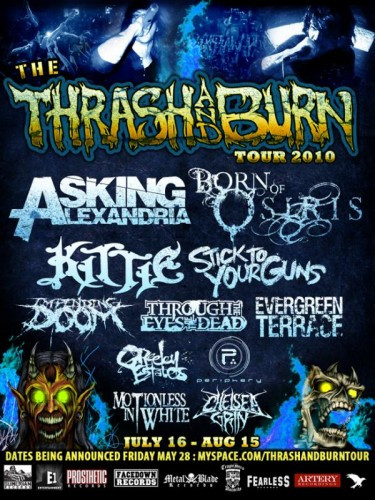 If you live in the U.S. and you’re like us, you’ve been keeping your eye out for news about the 2010 North American installment of the THRASH AND BURN TOUR — because previous versions of that tour have been pretty decent.

Well, we’ve got some breaking news. The identity of the bands on the tour have now been announced — and the co-headlining acts are Born of Osiris and Asking Alexandria.  The full line-up comes after the jump, with a few more tidbits of info . . .

[UPDATE: The dates, cities, and venues for this tour have now been released — and we’ve added those after the jump, too . . .] END_OF_DOCUMENT_TOKEN_TO_BE_REPLACED