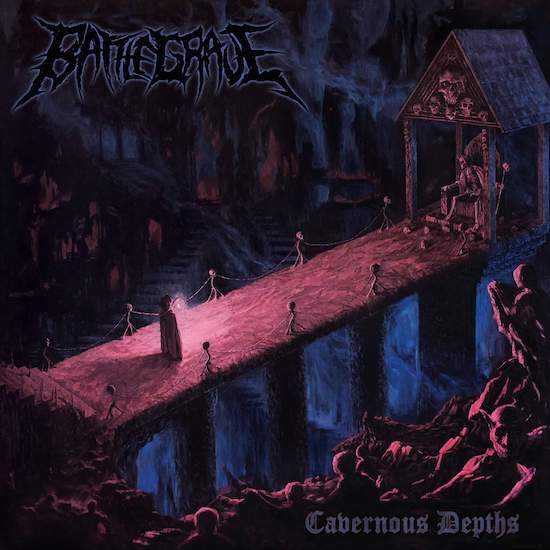 The Australian duo Battlegrave chose a suggestive name for themselves, one that evokes both warlike savagery and visions of death and all its horrors. Further clues to their music (or at least some aspects of it) are evident in the remarkable hand-painted cover art by Shaun Farrugia for their sophomore album Cavernous Depths. It’s subterranean and supernatural, and has the hallmarks of an instant classic.

But of course these are all merely hints. Of course, other hints are to be found in the band’s previous releases, the 2017 EP To Hell With War and their first album, 2018’s Relics of a Dead Earth, but don’t put too much stock in those hints, because Battlegrave‘s music has evolved from then until now, morphing (as the band themselves have observed) “from more of a Crossover Thrash project to a Thrash/Death project, and now closer to straight-up modern Death Metal”.

One thing hasn’t changed, and you’ll figure it out damned fast when you listen to the new album today in advance of its July 22 release by Bitter Loss Records, and that’s the speed and ferocity of Battlegrave‘s attack. END_OF_DOCUMENT_TOKEN_TO_BE_REPLACED