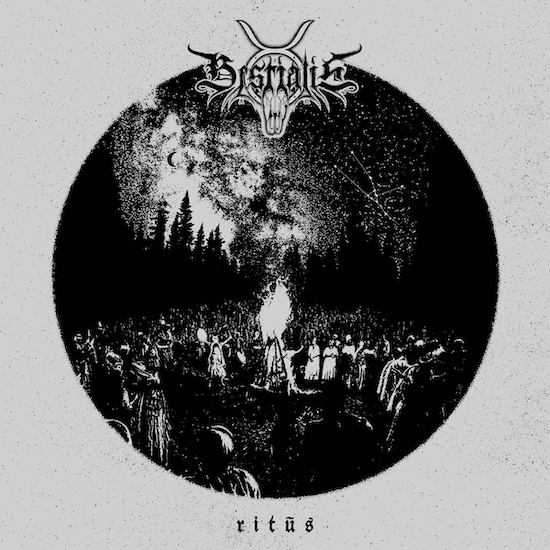 Just yesterday I was confessing that one of the reasons I’m so open to hosting premieres every day is a selfish motivation — because it affords the opportunity to discover new music from new bands that I might otherwise miss (and that you might miss too!). Sometimes those opportunities bring thrilling surprises, and today it has happened again through the discovery of a fascinating German black metal band named Bestialis.

What you are about to hear, on the day of its release by Vendetta Records, is the debut recording of this group, an EP named Ritus. The formidable success of the EP will be less surprising if you understand that Bestialis is the result of of a long-term artistic and spiritual conspiracy between two artists — vocalist Lastaurus and guitarist Absorber — who have been making music for 20 years; both of them are part of northwestern Germany’s Culthe Collectiv/Culthe Fest (Münster).

What they’ve achieved is both conceptually and musically tantalizing. In their lyrical focus, Bestialis focus on a concept “whose basic premise is to understand humans as – primarily and in the most positive way – animal beings, and thus, at its essence, to explore, proclaim and worship the bestia or beast in man.”. Ritus thus offers an introduction to this concept and puts into its narrative tales of prehistoric bull cults and Persian mythology (such as the Epic of Gilgamesh, provided in the band’s own reinterpretation). END_OF_DOCUMENT_TOKEN_TO_BE_REPLACED