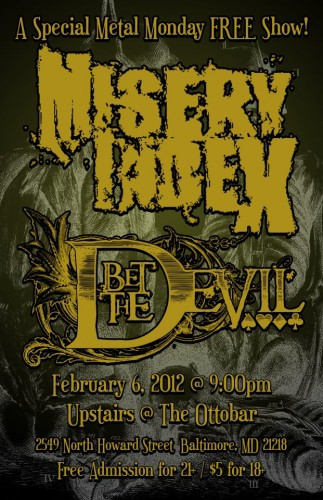 (DemiGodRaven wants to spread the word about a free show on the other side of the continent . . .)

I’m going to be completely honest with you guys: I have never been to Baltimore. The closest I have ever gotten to the state of Maryland was when I flew to Georgia to watch my younger brother graduate from basic training. Maybe they’re on the same longitude lines, but that would literally be the only connection I have for travels on the East Coast.

So, I think it’s clear that I am not by any means a leading authority on anything having to do with Baltimore, MD. Outside of The Wire and the recent Ace Ventura-esque events with the local NFL football team (granted, it’s not like the team close to Hayward, CA, where I grew up, did any better), I have zero exposure to how the city is laid out. Thus, if this show actually is taking place in a Baltimore suburb (as when shows are announced for The Boardwalk in Sacramento, when the Boardwalk is actually in Orangevale), please do not jump my shit for it.

Misery Index announced via Facebook a few days back that they would be performing a free show with a group called Bet The Devil over at The Ottobar. The show happens on February 6, 2012, so…next Monday. If you need details there is an event page on Facebook to check out. I’m just trying to spread the word about a free show. Especially a free show where you get to see Misery Index, who put on a fucking great live show. I saw them in October 2010 and rocked out incredibly fucking hard during the whole set and in general had a blast. I have not heard Bet The Devil, so if anybody has and can put forth some impressions about them in the comments, that would be great. Really, help out any fellow East Coast folk who may make the journey to see the show.  (more after the jump . . .) END_OF_DOCUMENT_TOKEN_TO_BE_REPLACED