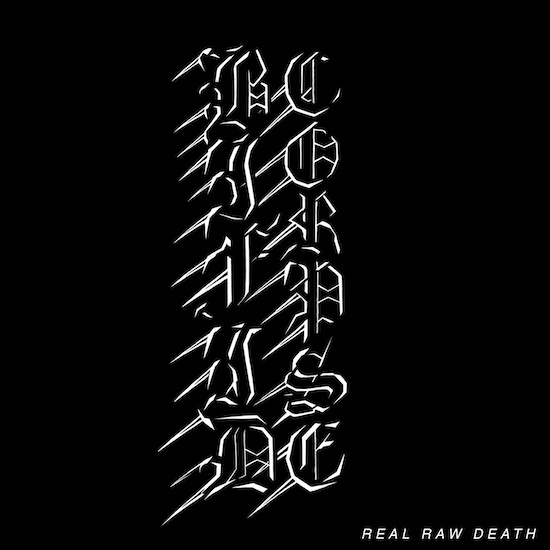 (In this feature Chris Luedtke introduces our premiere of a new EP by Chicago’s Bifid Corpse, which is being released today via Bandcamp and features a logo by Warhead Art.)

Since 2016 Chicago two-piece Bifid Corpse have been punching out heavy, punishing tunes that largely walk a fine line between death metal and grindcore. Frantic blasts, brutally heavy guitar, gruff throat-ripping screams and growls. On top of that, sprinkle in a little bit of beatdown and the occasional doomy section and you have an idea of what you’re walking into. After a slew of shorter releases, a three-way split with Surfer James and Pythian, it looks like the band decided to go out and smelt a bigger hammer, namely their latest release Real Raw Death.

The title could not be more fitting. Bifid Corpse have cranked up the heaviness and recording quality without sacrificing any of the rawness. Real Raw Death is an immediate sledgehammer shot to the speakers. Opening with “Severed Skewed Consumed” the band lead in blasting and swinging. The heaviness and riding that grind/death wave sets up the album well. END_OF_DOCUMENT_TOKEN_TO_BE_REPLACED