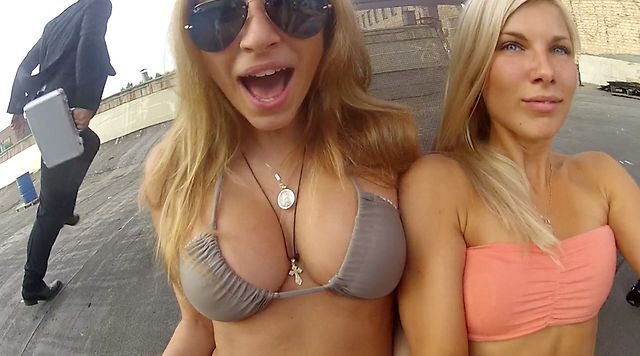 Yeah, that’s a pretty grandiose claim since it’s only March and I have no crystal ball that would tell me what the rest of 2013 will bring. But I can’t imagine any other music video will be more fun than “Bad Motherfucker” by Biting Elbows.

Our friend Professor D. Grover the XIIIth e-mailed me about this video two days ago, and I’ve been so smashed by work that I didn’t watch it until this morning. His e-mail gave it a big build-up, and man, was he right.

Biting Elbows are an indie/punk band from Moscow, so I guess you’d have to say they’re “off topic” for this site — but the video is definitely metal. After seeing it I did a bit of research and learned that 18 months ago they released another one named “Insane Office Escape” with the music from their single “The Stampede” as the soundtrack. It was directed by the band’s front man Ilya Naishuller, and it apparently racked up 2 million hits in a matter of days.

The new video, also directed by Naishuller, is for a song named “Bad Motherfucker”. Sub-titled “Insane Office Escape 2”, it starts right after the closing moments of the previous video. It’s a piece of branded content for the Russian vodka company Neft, whose product is used at the start of the video as an impromptu disinfectant; if you pay attention, you’ll also see the company’s logo reappearing in odd places later. END_OF_DOCUMENT_TOKEN_TO_BE_REPLACED