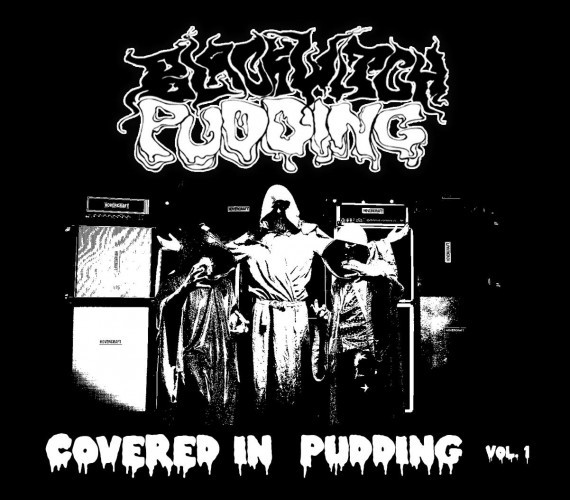 There’s some kind of party going on at the beginning of “Gods of Grungus”, the song we’re premiering today by Portland, Oregon’s Blackwitch Pudding. It sounds like a party that’s about to get way out of hand — and then the pounding starts, bones begin to splinter, and the splash of viscera begins to paint the walls red. Or at least that’s what I was imagining while I banged my head ’til the vertebrae began to disjoint.

The song is one of four that will appear on the band’s forthcoming EP, Covered In Pudding Vol. 1, which follows the 2013 debut album by these three robed wizards, Taste the Pudding. It’s a methodically pulverizing concoction, loaded with craggy monolithic riffs, gut-jarring bass and drum hammering, and vocals that are choked with gravel, booze, and the contents of a full ashtray. As this demented and doomed party continues, the guitar begins to squall and wretch like the victim of a ritual sacrifice. The song is a putrescent mass of riff infection, and it’s really damned easy to catch the disease.

If you’re in the mood for some filthy stoner doom that you can carry around in your head all day, look no further. Bonus points if you can figure out the song that these doom wizards are parodying. END_OF_DOCUMENT_TOKEN_TO_BE_REPLACED