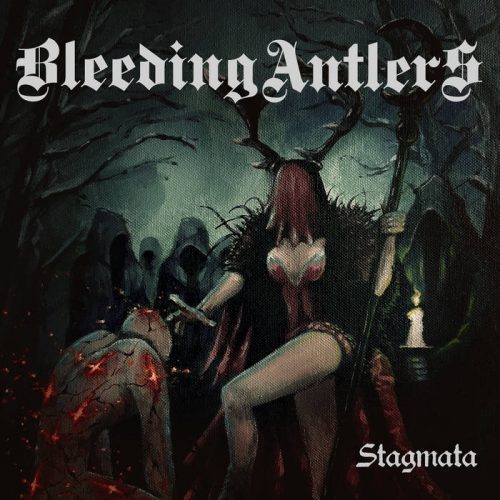 (It looks like Andy Synn had as much fun writing this review of Bleeding Antlers‘ debut album as he did listening to it — and he had a LOT of fun doing that.)

Heavy Metal is, as we all know, a “no fun allowed” zone.

It’s a place for serious musicians to write serious songs about serious subjects, riddled with serious darkness, while wearing their most serious faces.

The thing is, no-one seems to have told London lotharios Bleeding Antlers that, because their debut album, Stagmata (yes, there’s even a pun in the title) is one of the most ridiculously riff-happy and unashamedly fun experiences I’ve had in a long, long time.

Don’t go making the mistake of thinking the band are a joke, however.

While the group clearly aren’t taking themselves too seriously, the music itself is more than capable of standing on its own two (or four) feet, while also answering the age-old question… what would happen if you took the catchiest bits of Candlemass, the hookiest parts of Paradise Lost, added a dash of the grim grandeur of Primordial and a touch of almost Nu-Metal-ish groove, and then laced the whole thing with a hefty helping of folk-goth glamour, Hammer-horror camp, and drunken satanic swagger?

Well, you’d have a hell of a good time, I can tell you that. END_OF_DOCUMENT_TOKEN_TO_BE_REPLACED