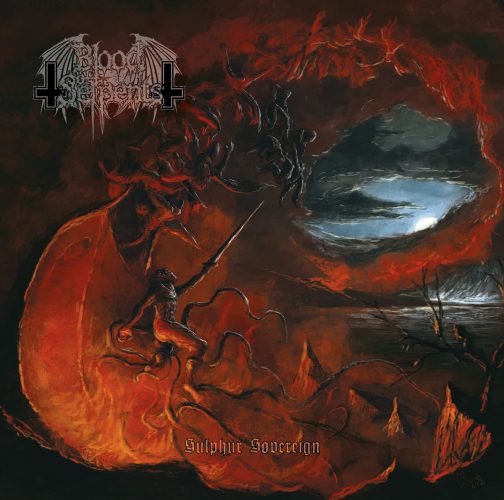 The song you’re about to hear is such a wild, vicious, blazing torrent of sound that it’s hard not to think of it as a shock-and-awe campaign, or perhaps as a cyclonic Sirocco scourge blasting from the open gates of Hell. The name of the track is “In Darkness, Brotherhood“, and it comes from Sulphur Sovereign, the explosive new album by the Swedish black metal band Blood of Serpents.

This new track isn’t the first one to be divulged from the album in advance of its September 25 release by Non Serviam Records. Earlier this month we were assaulted by the song “Devil’s Tongue“, which was so striking that we were moved to write about it immediately, before we had any inkling we’d be invited to host today’s premiere. The sheer electrifying effect of that song’s blinding speed and warlike vehemence (and the scalding savagery of the vocals) were gripping, and the high, soaring, delirious grandeur of the melody at its core made it even more riveting. And now we’ve been riveted again. END_OF_DOCUMENT_TOKEN_TO_BE_REPLACED

Yesterday brought the unalloyed joy of a new Beyond Creation song. If you’re a follower of the band’s music, you’ll have a good idea what you’ll get — which is a whole lot of pulse-pushing, eye-popping fun. END_OF_DOCUMENT_TOKEN_TO_BE_REPLACED