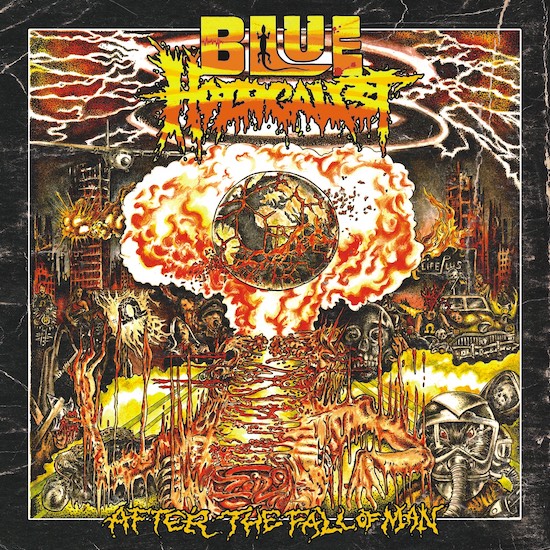 (Today we’re bringing you a whip-fast blast of grind released by a trio of labels, with an introduction written by Christopher Luedtke.)

Today we have a double threat of menacing grindcore. Blue Holocaust and Morgue Breath have teamed up to release After The Fall of Man / Hongo Atroz, both bands each knocking out five tracks of blasting fury.

First up is goregrinder Blue Holocaust. Hailing out of Albi, Occitanie in France, the one man band has been grinding since 2001, but has also released other projects such as Vomi Noir and Pulmonary Fibrosis. Blue Holocaust has also released three full-lengths, and a number of splits with bands such as Expurgo, Lysergic Rites of Sadopriest, Houkago Grind Time, and others.

The Blue Holocaust side is raw, punchy goregrind. It has the gurgle, raw goregrind sound but without the vocals sounding like they’re drowning in fluids. The songs also let in some death metal ala Mortician such as “Body-melting Thermomuclear Endgame” and “Wastelands of the Year Omega.” The solos are quick but wailing. And much in the spirit of grind/goregrind it’s over before you know it. END_OF_DOCUMENT_TOKEN_TO_BE_REPLACED