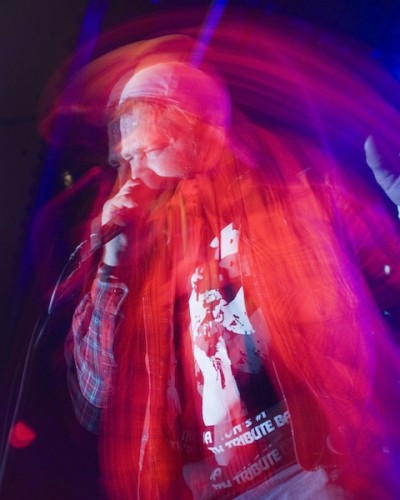 (In this interview conducted by phone last month, NCS writer BadWolf caught up with Bob Meadows of Philadelphia’s A Life Once Lost, who have a new album in the works — the first since 2007’s Iron Gag. The band played the inaugural Metal Suckfest in New York City last November (reviewed by BadWolf in a two-part feature here and here), and the live photos accompanying this interview except for the one above were taken at that show for NCS by Nicholas Vechery.)

And why shouldn’t he be? As vocalist for A Life Once Lost, it’s part of his job description. More than that, his band has been jerked around within the industry on a near-continual basis for their entire career. It’s a common story, but a tragedy nonetheless. It’s been nearly five years since 2007’s Iron Gag album, and since then A Life Once Lost has gone through innumerable lineup changes.

But all that’s in the past. This year, the Philly bastards will release a new album on Season of Mist. They’ve already done some smaller gigs, as well as played the Metal Suckfest.

So why is Bob so angry? Maybe it’s got something to do with the toxic in-fighting that pulls our great art-form into infamy. It might also have something to do with the youngsters following in Bob’s footsteps. These Djent youngsters owe him some credit as well: A Life Once Lost mixed Meshuggah-like math grooves with melodic hardcore sensibility (before Hot Topic co-opted that sound) over a decade ago.

His views on these and other subjects, after the jump! END_OF_DOCUMENT_TOKEN_TO_BE_REPLACED