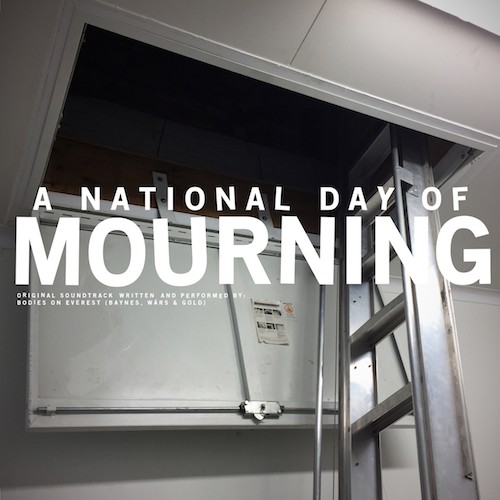 Bodies On Everest are a trio of noisemongers who come from Liverpool and Manchester. They wield two bass guitars, drums, and assorted implements of electronic torture; their voices are also weapons. They describe their music as “Dungeon Wave” — “a caustic mix of drone, doom, noise and cursed psyche-sludge”, as their labels would say. Their new album is A National Day of Mourning, “a funeral dirge for modern life”. It is dedicated to:

“…a car park in Sarasota FL / a wall in Harrisburg, PA / a chlorine tank / A photograph of a fishing net / A fire extinguisher / A lawyer at a railway station / a section of the pacific ocean near the coast of Chile…”

The album is also described by the band as “the very urgent and desperate result of an accident.”  “Welcome to Hell,” they say, and it is an apt greeting they give us.

“Tally of  Sevens” is the second single to be presented from the album, which will be released in its entirety by Third I Rex and Cruel Nature Recordings on April 29th. The band have written some words about the song (or perhaps these words are in the song), which are no less cryptic than the others we’ve already quoted: END_OF_DOCUMENT_TOKEN_TO_BE_REPLACED