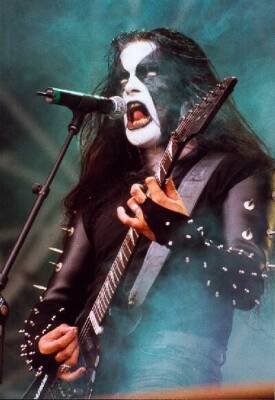 Back on December 15, the New York Times ran a story about an academic symposium held in Brooklyn called “Hideous Gnosis,” which explored intellectual aspects of black metal.  We posted some commentary about the event that basically made fun of the whole thing.  We threw around words and phrases such as “pointy headed academics,” “fucking pretentious,” and “blather.”  I think we also implied that all the participants were douchebags.

Hey, it was easy to do.  Sort of like clubbing baby harp seals, except without the back-splatter. And what did you expect?  We’re an extreme metal site, which by definition means we pretty much disrespect everyone except the bands who work their asses off making the music we live by, and a few metalhead writers who do what we’re trying to do, except do it a lot better. And we never feel guilty about it.

We got a couple of comments on our bushwhackery that have at least given us pause — one from the “Hideous Gnosis” symposium group itself and one from Shinjuku Thief. We’ll talk about the first one today and the second one soon after.  And for musical accompaniment, we’ll stream some new black metal that will core out your skull.  Read on after the jump. END_OF_DOCUMENT_TOKEN_TO_BE_REPLACED