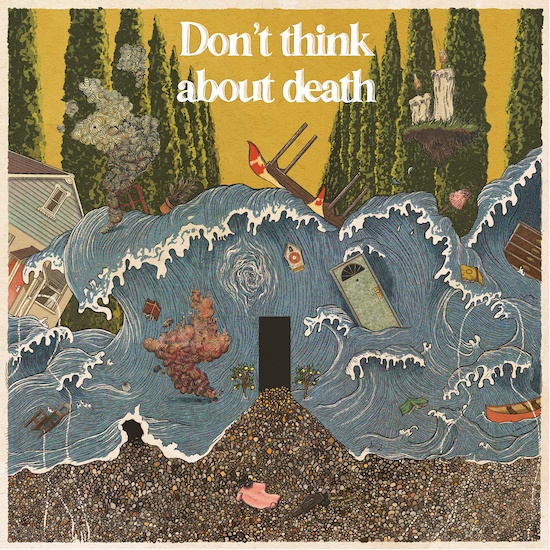 To help introduce their new album Don’t Think About Death the UK band Chalk Hands have put a big spotlight on the album’s first single, a song named “Les Jours Passent Et Ne Me Ressemblent Pas”. Five days ago they revealed the song through a fascinating animated video made by one of the band’s members (Tommy). And today we’re premiering another video for the same song, but this time it’s a film of a live performance.

The song is in French because that’s the native tongue of lyricist, vocalist, and guitarist Antoine. He tells us that he chose to write this one in French because it allowed him to express himself “in a more honest and unaltered fashion”, which was important because the inspiration was such a personal one for him.

The inspiration is signified by the song’s title. He explains: “The title comes from a French idiom which means something like ‘the days go by and aren’t alike’ (somewhat equivalent to the saying ‘tomorrow is another day’) but I’ve twisted a word to say ‘days go by and I don’t recognise myself’”. END_OF_DOCUMENT_TOKEN_TO_BE_REPLACED

Yeah, don’t remind me, I know human males do that too. I guess maybe an album-length funeral doom track could provide some reciprocal coital benefits, but I assume most people like to shift into a higher gear at some point, except for those who pass out somewhere along the way. I’ve never seen a sloth have sex. Might be worth investigating. END_OF_DOCUMENT_TOKEN_TO_BE_REPLACED