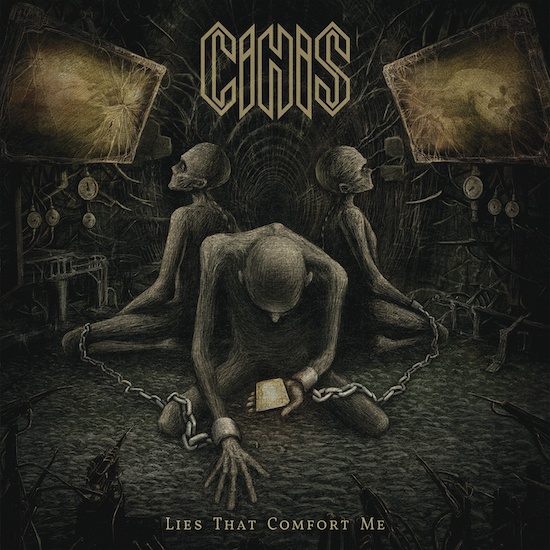 The Polish death metal band CINIS has had a long career, with a 20th anniversary coming up next year, but they’ve not filled those decades with plentiful releases. A demo began their recorded output in 2005, but three years passed between then and their first album, The Last Days of Ouroboros, and six more years elapsed before the second one arrived, 2014’s Subterranean Antiquity. Even that significant interval was exceeded by the time that has trudged by before a third full-length was completed and scheduled for release, but at last it’s almost here.

Lies That Comfort Me is the name of the new one, and September 23rd is the date on which it will be discharged by the excellent Polish label Selfmadegod Records. Nine tracks long, it proclaims an unyielding homage to such formidable trans-Atlantic forerunners as Morbid Angel, Deicide, and Cannibal Corpse, while also linking arms with the stylistic influences of CINIS countrymen Vader and Decapitated.

You could say it’s a way of proclaiming that certain old schools of death metal are undying, and still live in the hearts of veterans such as these four. But fear not, Lies That Comfort Me isn’t some uninspired nostalgia trip, but a full-bore juggernaut fueled by fire and fury, with the kind of riff mastery that proves to be highly addictive, a rhythm section that knows how to groove hard, and enough changing facets to keep listeners on the edge of their seats throughout the whole thrill-ride.