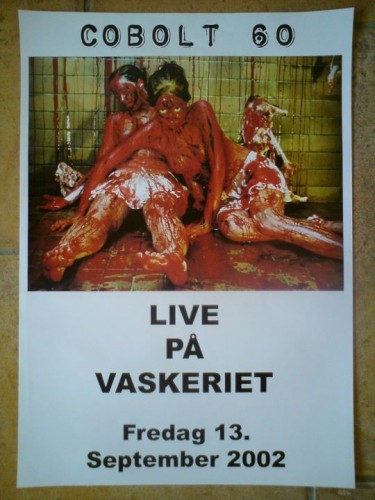 (Andy Synn reviews the first and only album by Norway’s Cobolt 60 — who now have a new album in the works for the first time in 10 years.)

Cobolt 60 is another project from Daniel Olaisen, AKA Død, also of Blood Red Throne, which sees him teaming up with original BRT vocalist Mr Hustler (handling both drums and vocals) with the sole aim of tearing the world a new one with a vicious brand of industrial-strength blackened thrash. The fruit of their unholy labours was the album Meat Hook Ballet, which whipped up a storm of controversy and critical acclaim, before the project was put on hold due to the increasing pressures and responsibilities of the pair’s regular endeavours.

Although Cobolt 60 actually predates Olaisen’s other endeavours, and the group has been inactive for over 10 years now, recently something has been stirring in its shallow, unmarked grave…

Thus it seems a perfect time as any to go back and inflict upon you all the chainsaw black thrash of their debut.

Right from the outset, the record pulls no punches, the menacing introductory bars of “Chainsaw Michaelangelo” finally exploding into a display of berserk aggression and air-tight guitar work. Revving and roaring as it bursts out of the gate, one thing that immediately sets the band apart from their thrashy-peers is their mechanical, almost industrial, guitar tone, one that is reminiscent of Zyklon’s trilogy of terror (for further comparisons in sound see The Wretched End) and makes each song grind and piston with atomic fury. Choppy, machine-gun riffage strafes the listeners, softening them up for the air-raid assault of warp-speed blasting and serrated tremolo guitars that pitch the track into full on extreme-territory. END_OF_DOCUMENT_TOKEN_TO_BE_REPLACED