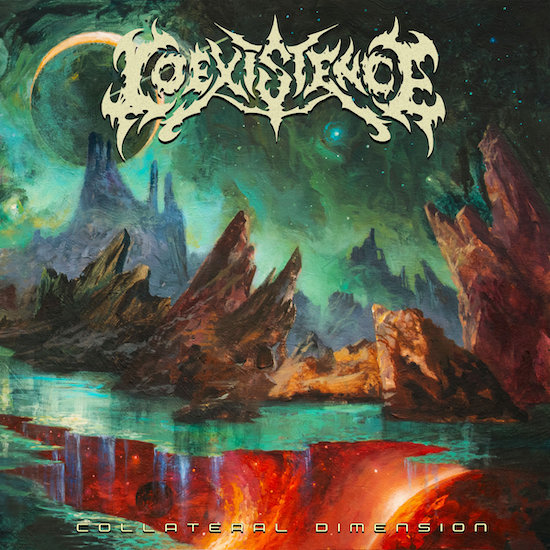 The cover of the new album by Coexistence, as rendered by the enormously talented Adam Burke, is a wondrous sight to behold, a collage of beautiful colors and strange sights — of jutting spikes of stone, of a giant moon and winking stars, of aquamarine water cascading into what seems to be an entirely different dimension or sector of the cosmos…. And this is one of those pleasing cases in which the attractions of a painted album cover suit the music enshrined in the record.

That record, Collateral Dimension, is the debut album by this Italian band, who already opened lots of eyes through their 2018 EP, Contact With the Entity (reviewed here). And as good as that EP was, it is no exaggeration to say that the album is a great leap forward. Transcending Obscurity Records, which will release the album on October 23rd, calls it “a marvel”, and that’s no exaggeration either. It presents a tremendously multi-faceted hybrid of technical and progressive death metal that’s capable of entrancing and bewildering the listener while coming for your throat at the same time. We have a great example of this in the song we’re presenting today, “Symbiosis of Creation“. END_OF_DOCUMENT_TOKEN_TO_BE_REPLACED 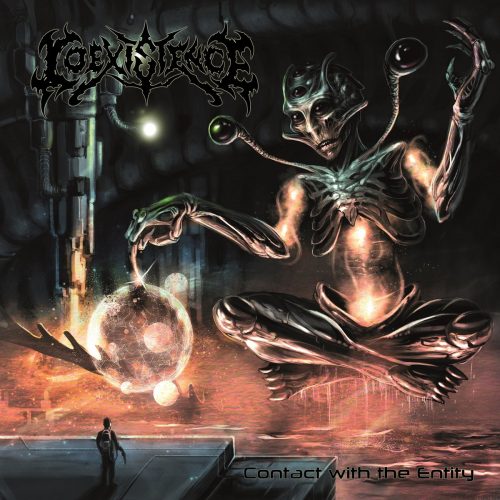 Contact with the Entity is the debut EP by the Italian progressive death metal band Coexistence, and it’s an enormously impressive first foot forward, displaying the kind of song-writing assurance, creative exuberance, and striking performance skill that one would expect from a band much further into their career. We’re very happy to be the bearer of a full stream of the music today, in advance of its release on May 21st.

The EP consists of four tracks, including a brief but disturbing interlude after the head-spinning rush of the first two songs. And those first two tracks, as well as the last one, really are the kind of kaleidoscopic experiences that open eyes wide. All the performers are technically adept; the music is atmospherically rich and wonderfully dynamic; it’s compulsively physical; and it’s loaded with wide-ranging progressive flourishes that include ventures into jazz-fusion-like mind-bending. END_OF_DOCUMENT_TOKEN_TO_BE_REPLACED