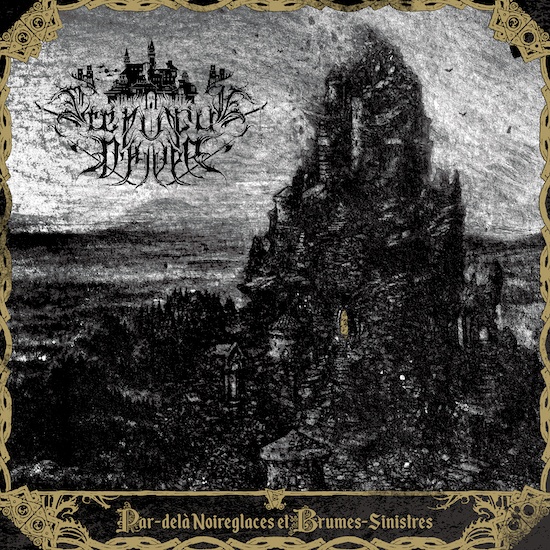 Par-Delà Noireglaces et Brumes-Sinistres, the new album by the French band Crépuscule d’Hiver, is a time machine for the mind. It brings back memories of the more mysterious and fantastical strains of black metal from the ’90s, and also sends the imagination looping much further back, into a medieval age — or at least a long-lost age we romantically imagine it might have been, where even in blood, suffering, and death there was glory to be found, and an appreciation of elegance to be treasured.

The album is substantial in its length and tremendously elaborate in its experiences, produced by a combination of medieval black metal and dungeon synth, among other ingredients. It combines the talents of the band’s alter ego Stuurm, who is the composer, guitarist, keyboardist, lyricist, and principal vocalist, and NKLS, whose contributions as bassist and drummer play a vital role in the music’s overall success. In addition, credit must be given to an array of guest vocalists and guitarists — Hexēnn, Aker,  Wÿntër Ärvń, Vettekult, and Spellbound — whose carefully chosen contributions make a richly multi-faceted album even more spellbinding.

The album is being released today by Les Acteurs de L’Ombre Productions, and it’s our pleasure to present a full stream of all the music, with our own thoughts about each of the seven songs. END_OF_DOCUMENT_TOKEN_TO_BE_REPLACED