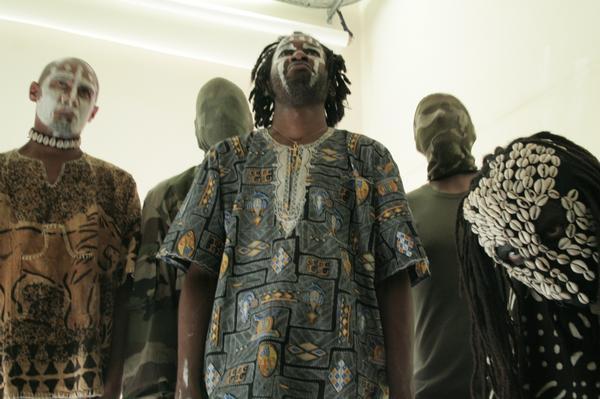 D-Fe was a band who had an 11-year run from June 1997 to October 2008. As far as I can tell from what little English-language writing is available, they were based in Paris. They created a kind of metal unlike anything else I’ve heard, fusing together Afro-Caribbean rhythms with extreme metal and adding stylistic elements from lots of other genres besides. Sometimes the music has a nu-metal vibe, but much of it sounds like a tribal form of death metal and grindcore.

The lyrics are apparently a kind of Caribbean dialect spoken on the island of Guadalupe, plus an African dialect spoken in Cameroon, plus French, plus who knows what else. I have no idea what the words mean, but the band’s now-dormant MySpace page (here) says “D-Fe was nervous and violent (and sometimes dark), because the band wanted to sensitize the public about different problems of the African continent and its Diaspora.”

As you can see from the photo above, they wore masks or African tribal paint and dressed in an assortment of styles, both urban and somewhat more traditionally African. They also had an exotic-looking female singer who shared vocal duties before the band ended their run. I got intrigued about this band as much by the visuals as by the music, and the two come together in a video you can see right after the jump. Don’t be misled by the music in the first minute and a half; the shit does get heavy and crazy after that intro. END_OF_DOCUMENT_TOKEN_TO_BE_REPLACED