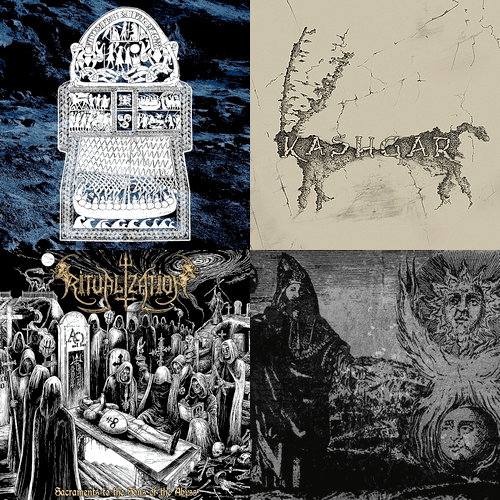 (Our super-hero friend Gorger returns — quickly — with the second 2017 installment in his ongoing series providing super-heroic support to our mission by reviewing releases we’ve overlooked.  To find more of his discoveries, type “Gorger” in our search bar or visit Gorger’s Metal.)

In the very first sentence on your average Beneath the NCS radar post, Islander tends to present me as some kind of super-villain who “embarrasses” everyone by holding up whatever gem they’ve “failed” to mention. Although I dream of becoming a super-villain when I’ll never grow up, this might leave you with a somewhat distorted impression. Allow me to clarify.

There’s about a dozen metal albums being released every single day. Counting all kinds of releases, we’re talking 45-50 a day altogether. And that’s just the “tip of the iceberg” that’s being listed on Encyclopaedia Metallum, whose strict policy prevents more alternative forms from gaining an entrance. (I’m all about true metal, and so I agree, but that’s simply because I’m so bloody trve). If we were to look into all kinds of unconventional styles that might appeal to metalheads, whether it’s atmospheric dungeon synth, soaring acoustic tree-hugger hard rock, or DIY slam-punk hardcore grind-screamo, the list of daily musical launches would grow insuperably massive.

No single human would be up for the task of absorbing all this. Just presenting it would mean receiving newsletters from thousands of bands and labels. Just imagine opening your mailbox only to see that you’ve got 263 new mails. For the past hour. Obviously, there’s going to be tons of shit that floats underneath the radar for any one of us, and my inadequate radar often fails at noticing passing jewels too. I also often find myself detecting a gem and grasping for it, but failing to grab a firm grip, I helplessly end up observing it float off into the mist.

I might, in an infallible matter, present you with those hidden gems that the wretchedly flawed NCS-crew fail miserably to cover, but unfortunately, I’m not the super villain/prophet (delete as appropriate) you all visualize. I just do what DGR, Andy Synn, Austin Weber, TheMadIsraeli, Comrade Aleks, KevinP, Wil Cifer, or anyone else writing anything for this putrid site does; giving Islander a hand by chipping in with some precious metallic picks for the perpetually unquenchable masses. Only difference is they present relevant artists and releases, often in advance, whilst I’m always late to the party like some late bloomer. I’m just another enthusiastic metalhead, whose antennas are no more superhuman than anyone else’s. I’m sorry to disappoint you and to rip this revered illusion of yours to shreds.

What? You already knew all this? Oh… Good. I guess… END_OF_DOCUMENT_TOKEN_TO_BE_REPLACED