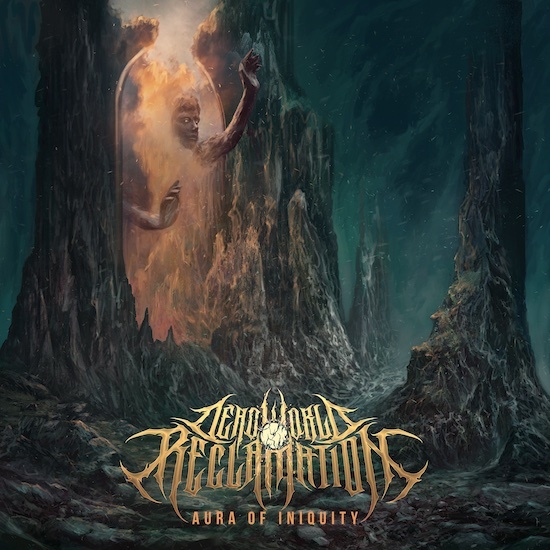 The first word that comes to mind in considering the new music of Dead World Reclamation is extravagant — quickly followed by exhilarating, ingenious, and barbaric. Mark Erskine‘s cover art for this Arizona band’s new album, Aura of Iniquity, is itself astonishing, but make no mistake: it’s not misleading, because the music within is equally striking and no less memorable. And the songs’ lyrical themes are in keeping with the fascinations of the art and the music.

For those who may be familiar with the band’s first album, Sentient, you will be expecting melodic death metal, and that is indeed still at the heart of the band’s creations, but this new album also represents a considerable divergence from what came before. The compositions are even more intricate, and now exhibit even greater technicality in the execution while also bringing into play scintillating keyboards and mesmerizing orchestrations, without stinting on bludgeoning brutality.

As a sign of these changes, and of the kind of experience that spawned all those adjectives in the opening paragraph, we present today a lyric video for an album track named “Heralds of the Formless One” in advance of the record’s release on April 23rd. END_OF_DOCUMENT_TOKEN_TO_BE_REPLACED