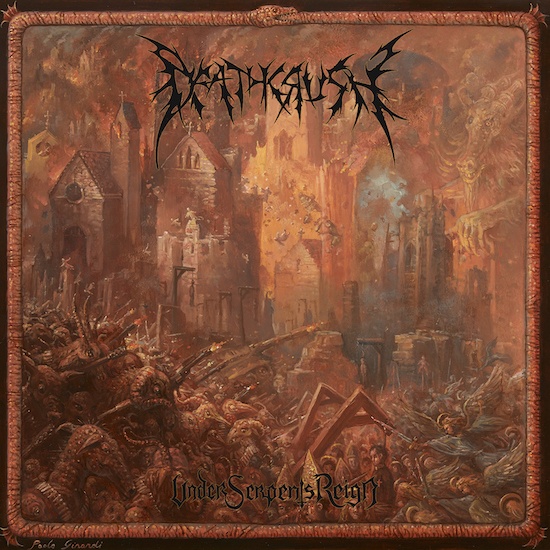 The Sardinian band Deathcrush have been growing in hideous strength over the course of a career that’s now almost two decades long. For such a long life, their discography is relatively limited, with the most prominent releases being two studio albums and one live album (the sign of a preference for quality over quantity). Their third album, Under Serpents Reign, is now set for release on April 26th (tomorrow!) by Time To Kill Records.

If you knew nothing about the band’s music, their name alone would give you a clue. And most definitely, crushing death metal inspired by the likes of Morbid Angel, Immolation, and Deicide, has been a key ingredient in their blasphemous discharges of fury. But it’s not the only ingredient, as you would know if you heard the changes reflected in their second full-length, 2017’s Hell, as compared to their debut album Collective Brain Infektion (2013).

The new album seems like a continued evolution, one that integrates the more brutal ravages of the debut and the more blackened atmospherics of the second full-length, and then does even more to distinguish itself. You’ll have the chance to learn this for yourselves today as we present a full stream of Under Serpents Reign. END_OF_DOCUMENT_TOKEN_TO_BE_REPLACED