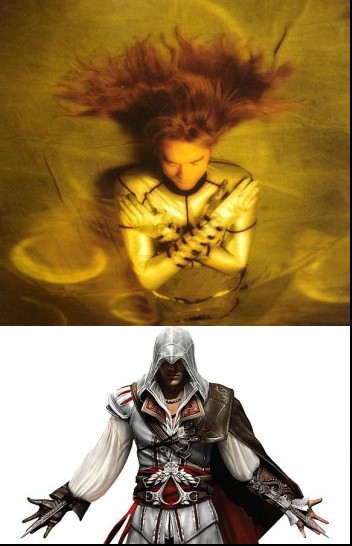 (DemiGodRaven (ex-TNOTB) looks at the similarities between the Assassin’s Creed games and the albums of Ayreon, and speculates about how the latter may shed light on how the former is going to end.)

Anyone who has been aware of my writing for a while knows pretty well that I’m a pretty huge nerd when it comes to video games. They’re my second love, with the first being music. They’re also the two most expensive hobbies in the world, but that is a whole other subject for some other time. Occasionally, there is an incredible crossover between some form of metal and video games, and I can’t help but give it a knowing wink and nod. Or, in this case it’s a confluence of all sorts of things that just happen to share the same archetypal concept.

The thought for this article began to cross my mind as I wrestled my way through the latest Assassin’s Creed game, which if you haven’t been following the series has basically gone from a sort of Lost-esque conspiracy science fiction to batshit fucking insane within the span of two yearly iterations as Ubisoft (the game’s developer and publisher) attempts to strange as much money out of the franchise as possible.

What is funny about the story of these games is that it has pretty much evolved into the same story told by the Ayreon discography, with its dream sequencer experiments and the end of mankind. Of course, you also have to acknowledge that even though the elements of each story are as fantastic as can be, the bare guts of each one are fairly basic and recognizable. I’ll be analyzing this to some extent while also pointing out the ridiculous similarities between the game series and the concept behind most of Ayreon’s work.

As always this deserves warning: I am going to be spoilery as fuck in the following article. Just a note though, it’s not like you should give a shit. Judging by the latest Assassin’s Creed game, the writing team doesn’t. END_OF_DOCUMENT_TOKEN_TO_BE_REPLACED

(The Number of the Blog may have drifted out to sea in a blazing longboat, its spirit soaring on flames toward the Valhalla of metal blogdom, but its writers are still with us, and we’ve opened our doors to them until something new rises from the ashes. Today, we’re delighted to post a series of year-end lists and awards from that pillar of TNOTB, DemiGodRaven.)

Hey folks! So uh….how are you all?

I’d honestly thought that I would take the time that TNOTB was down to disappear for a little bit and recharge, then come back full steam ahead, but sadly things didn’t go the way Grover and I had planned them, so we find ourselves in the welcoming arms of Islander and the NCS crew. It has been an absolute pleasure being the court jester/news guy/reviewer over at TNOTB, so thanks to those of you who read my various ramblings over the past two years.

But enough reminiscing, because it is 2011 and I have to fulfill my last obligatory duty as an egomaniacal blogger and issue my top arbitrary number of reasons that my music taste is better than yours for 2011. Originally, I wasn’t planning to number this list since I think that, as I have gotten older (you know, by a whole year), the blood in my veins has cooled somewhat and my desire for conflict has dropped dramatically. This was supposed to be a sort of peaceful declaration of how I had moved beyond numbering things and just wanted to list 10 discs that really stood out for me this year. I’ll be goddamned if I didn’t find myself subconsciously ordering the damn thing anyway because as soon as I wrapped up this list and gave it a quick glance over I noted that the way this thing lined up was pretty fucking close to my enjoyment of each album.

A note though: 2011 was an absolutely incredible year for music, and even though the albums on here may not be consistent with the ratings I gave them over at TNOTB (you guys can go look them up if you want!), this really became an archive of albums that got the most spins from me this year. Also, as I wrapped up this list I started writing out stuff that I wanted to include as well, which I didn’t bother to order and kept small, so once you are done with my 10 keep scrolling down and see what else I thought about this year. END_OF_DOCUMENT_TOKEN_TO_BE_REPLACED