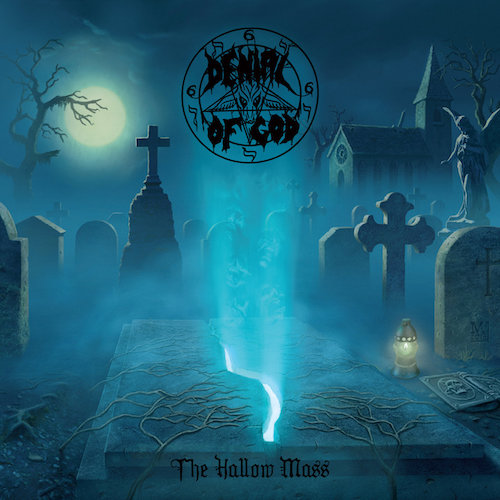 Denial of God are a distinctive presence in the long ranks of black metal bands. For one thing, the Danish brothers Azter (guitars) and Ustumallagam (vocals) have been creating music under that name since 1991. Apart from the fact that few bands have lasted so long, Denial of God have also crafted an unusual aesthetic for their music, moving in increasingly cinematic and theatrical directions, with a pronounced supernatural atmosphere, that has given birth to the description of their creations as “Black Horror Metal”.

Seven long years have passed since the band’s last album, Death and the Beyond, with only The Shapeless Mass EP (released this past June) as a sign of renewed activity. That EP was intended as a springboard into a new full-length, and that new album is now fast approaching. Entitled The Hallow Mass, it will be jointly released by Osmose Productions and Hells Headbangers this coming Friday, October 25th, and today it’s our privilege to bring you a complete stream of this massive new work. END_OF_DOCUMENT_TOKEN_TO_BE_REPLACED