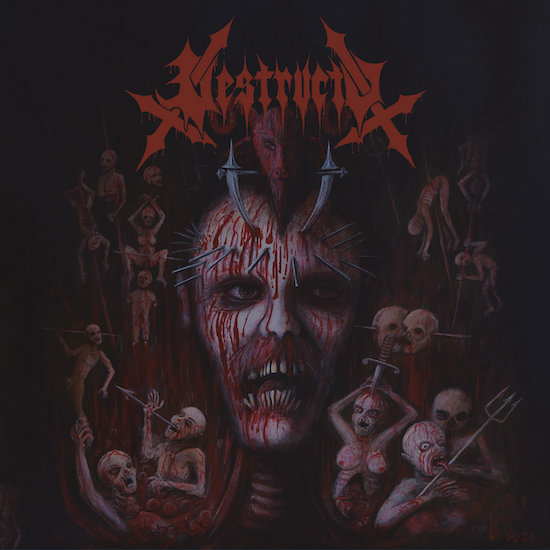 Odds are, when you see references to black thrash it’s likely to be written “ripping black thrash”. But that’s the point, isn’t it? To get your heart pumping and your head moving, and to do it in a way that feels dangerously untamed, vicious, and yes, eviscerating. The music of Destructo is definitely all that, and it’s intoxicating too, the kind of experience that makes you go wild in your head.

The band’s name itself is reflective of their musical attitude. Further clues can be found in the inspirations of these Dutch deviants: Destructo was formed in 2018 as a side-project between erstwhile Dödsrit and Nuclear Devastation bandmates Soulcrusher and Motörphallus (and later joined by drummer Necrohammer) as a tribute to bands like Sarcofago, Syphilitic Vaginas, and Japan’s Sabbat, and in their forthcoming debut album they’ve also brought forward forward influences from Bathory, Hellhammer, and especially G.I.S.M., thus creating a bastard child of first-wave black metal and ’80s speed metal and thrash.

The album, fittingly entitled Demonic Possession, is indeed one very wild and blasphemous ride, a ten-track, 40-minute experience guaranteed to juice your adrenaline into overdrive. It’s coming out on November 19th via Dying Victims Productions, and we’re as happy as fiends to premiere a song from it that exalts the “Black Mark“. END_OF_DOCUMENT_TOKEN_TO_BE_REPLACED