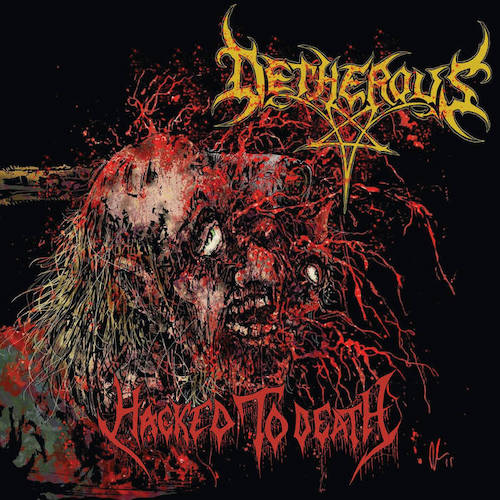 With an album named Hacked To Death and blood-spattered, head-cleaving cover art, you would expect the music to be… slaughtering. And this debut full-length by the death/thrashing Detherous is indeed packed with full-throttle rampages and fueled by a riotous, take-no-prisoners spirit. But this fearsome foursome from Calgary, Alberta, Canada do a whole lot more with their music than slash and burn. They’re adept at creating sensations of mania and mayhem, but the music is also adventurous, and full of surprising twists and turns.

We’ve got a  prime example of these qualities in the song we’re premiering today from Hacked To Death in advance of the album’s release on August 16th by Redefining Darkness Records. The name of the song is “Ridden“, and the band’s rhythm guitarist and lead vocalist Damon MacDonald describes its subject matter in these words: END_OF_DOCUMENT_TOKEN_TO_BE_REPLACED