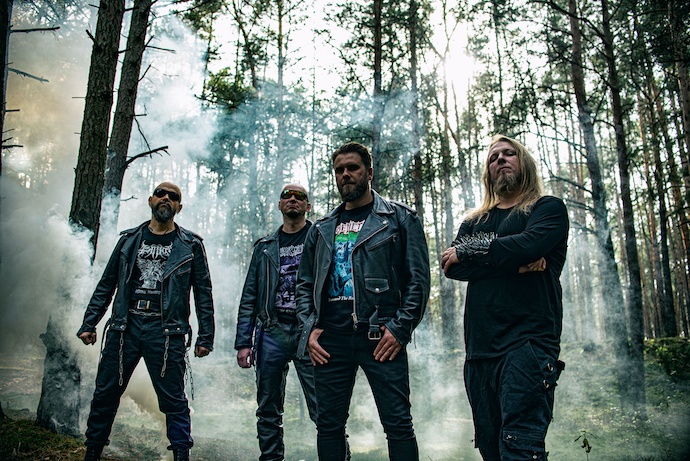 Whoever scheduled the release of Dira Mortis‘ new album on Christmas Day 2020 had a wicked sense of humor. The album, whose title is Ancient Breath Of Forgotten Misanthropy, will be discharged that day by Selfmadegod Records. It has many interconnected themes, but one of them is the use of religion by powerful forces to dominate, intimidate, and divide the masses, and in their hypocrisy to use it as a cover for evil. Lyrically, the album also calls for resistance, lest we be led deeper into an abyss of misanthropy in which humanity continues to be a plague of hate unto itself. Merry Christmas.

On the other hand, in many respects this new album is a great way for many of us (and we mean died-in-the-wool metalheads for whom Christmas has no religious significance) to celebrate the day, particularly this year, when gatherings of friends and family are downright dangerous (or outright prohibited) and when the year as a whole seems like such a godforsaken mess, and offers such powerful proof that people have become dangerously alienated from each other in more ways than simply physical distance.

What the album provides, in addition to particularly relevant lyrical themes, is the work of a veteran band whose talents give death-metal-heads other reasons to rejoice. END_OF_DOCUMENT_TOKEN_TO_BE_REPLACED