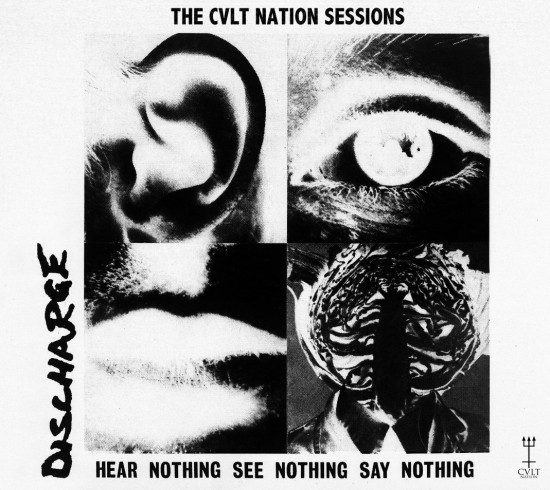 I know for many of you Discharge require no introduction. For others, allow me to provide this synopsis from The Font of All Human Knowledge:

Discharge are a British hardcore punk band formed in 1977 by Terence “Tezz” Roberts and Royston “Rainy” Wainwright. They are often considered among one of the very first bands to play hardcore punk…. The band’s 1982 debut album, Hear Nothing See Nothing Say Nothing, went to number two on the UK Indie Charts and number 40 in the UK Album Chart…. Hear Nothing See Nothing Say Nothing paved the way for thrash metal, black metal, crust punk, grindcore and various extreme metal subgenres. The musical genre of d-beat is named after Discharge and their distinctive drumbeat…. Many bands that followed Discharge’s stylistic approach, primarily in Sweden, began using the “Dis-” prefix and “-charge” suffix in their names….

With that preamble, here’s the point of this post: CVLT Nation has assembled a free compilation of the Discharge songs on Hear Nothing See Nothing Say Nothing, as covered by a hellacious (and diverse) line-up of bands that include the likes of Unru, Plagues, Absvrdist, Dephosphorus, and Occultist, just to name the ones I already know about and like. The full line-up is after the jump, along with a link where you can find out how to download this beast. END_OF_DOCUMENT_TOKEN_TO_BE_REPLACED