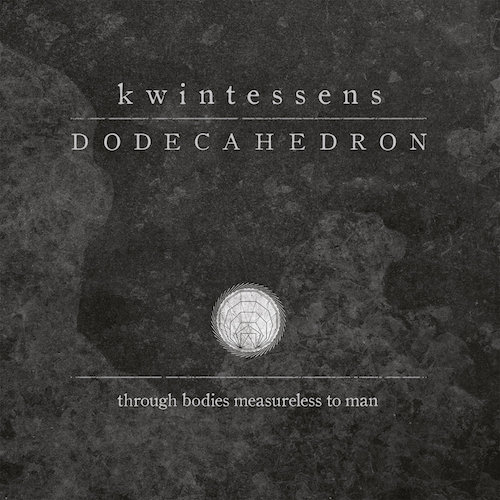 (We present Austin Weber’s review of the new album by the Dutch band Dodecahedron, recently released by Season of Mist.)

Back in 2012, Tilburg, Netherlands natives Dodecahedron came out of nowhere and dropped a rightly revered self-titled album, one that was far ahead of the curve for black metal at the time as well. When you release a black metal album as forward-thinking and nightmare-inducing as Dodecahedron, where exactly does one go from there?

It’s a bit of a long answer since the band write such complex and dynamic songs, but basically the music they’ve come up with on Kwintessens hits even darker while frequently dropping into lighter and oddly calming flourishes as well. A lot of new elements are at play here, and it’s also a slightly trimmer effort at 41 minutes versus their self-titled album, which was 52 minutes long. Simultaneously more deranged, yet also littered with a stronger prog influence and an influx of heavy grooves to their arsenal, the album also includes some grind-gone-technical black metal moments that caught me off guard too. END_OF_DOCUMENT_TOKEN_TO_BE_REPLACED

I’m afraid that if I googled “lock up” these days, I’d get stories about Donald Trump and Hillary Clinton. The world obviously needs to grind again, and the real Lock Up is here to help us do that. END_OF_DOCUMENT_TOKEN_TO_BE_REPLACED