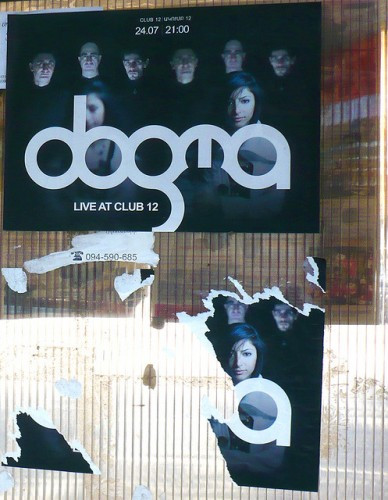 (We welcome this guest review by one our Italian readers whose name is Pietro.)

The thing with Folk has been excellently summarized by Jon Voight, in an episode of Ray Donovan when he puts a gun to Rosanna Arquette’s head and screams: “Am I authentic enough for you, fucking tourist?”. Folk today comes too often in super glossy, ultra-cool, mega-polished coffe-table editions. Sometimes that’s a good thing. Most of the time, it’s just too domesticated. Airport souvenirs. We’re all fucking tourists. But sometimes, as is the case with Armenian progressive metal band Dogma, Folk can be just an incredibly pleasant surprise.

In 2008 I was travelling through Armenia, and while strolling along the green parks of Yerevan, the capital city, a gig poster took my attention. I was late for the gig, but the visual style was intriguing, so much so that I took a photo (above) and, once back home, began some investigating.

I found out that the band had come together only months before, and they had a blog. A few weeks later I was the proud owner (probably the only one in Italy) of Dogma’s sophomore release, Ethnic Methnic, a highly accomplished piece of work, cleverly alternating metal stompers and acoustic ballads. Contemporary music infused with traditional melodies, dominated by the incredible vocal talents of Zara Gevorgyan. END_OF_DOCUMENT_TOKEN_TO_BE_REPLACED