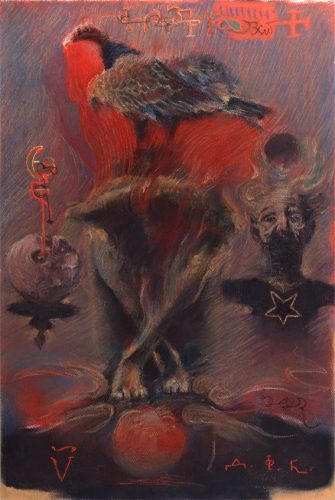 The Font of All Human Knowledge defines “mysticism” as “the practice of religious ecstasies (religious experiences during alternate states of consciousness), together with whatever ideologies, ethics, rites, myths, legends, and magic may be related to them”. Another source defines it as “belief that union with or absorption into the Deity or the absolute, or the spiritual apprehension of knowledge inaccessible to the intellect, may be attained through contemplation and self-surrender.” Ironically (or perhaps more accurately to some), an earlier version of the same source provides a second definition after the one just quoted: “belief characterized by self-delusion or dreamy confusion of thought, especially when based on the assumption of occult qualities or mysterious agencies”.

Mysticism as a significant source of inspiration is of course not unknown in extreme metal music, but I would say it’s a rarity. The kind of metal spawned by mystical beliefs, and used by its creators either to channel the insights and transformations brought about by mystical study, practice, or feeling, or to become a vehicle itself for the transformation of the self, seems to be found mainly in small and relatively obscure corners of the underground. I don’t mean to suggest that this is any different from what one might find in any other genre of music; it might even be true that mysticism plays a larger role in extreme metal than, for example, in hip-hop or country music — but of course I wouldn’t know, because I have tunnel-vision when it comes to my listening choices. END_OF_DOCUMENT_TOKEN_TO_BE_REPLACED