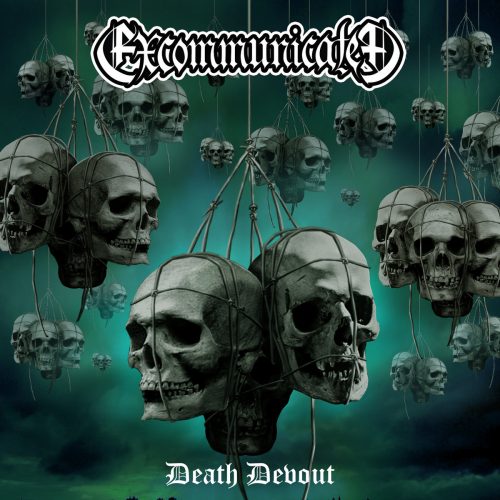 Collectively, the founding three members of the Louisiana band Excommunicated have more than 75 years of experience in the metal underground. When you add in the balance of the line-up on their new album Death Devout, the combined experience goes well over the century mark. They’ve been involved in numerous other groups across a range of extreme genres, but it’s clear that they all have one passion in common, one that’s reflected in this new album’s title — a devotion to death (metal).

Excommunicated’s 2011 debut album, Skeleton Key, was a collection of 10 original songs conceptually making up “a dark treatise on the medieval Catholic Church; centering on corruption, abuse, as well as strange and ghoulish habits”, and they have plans to record a sequel in the near future, with the tentative title of The Exterminating Angel. But what they’ve done in the meantime, with Death Devout, is to pay homage to a pantheon of death metal greats. This is an album that consists mainly of cover songs, and we have the premiere of one of those covers today in advance of the album’s April 20 release date.

But before we get to that premiere, let’s take a look at the track list: END_OF_DOCUMENT_TOKEN_TO_BE_REPLACED