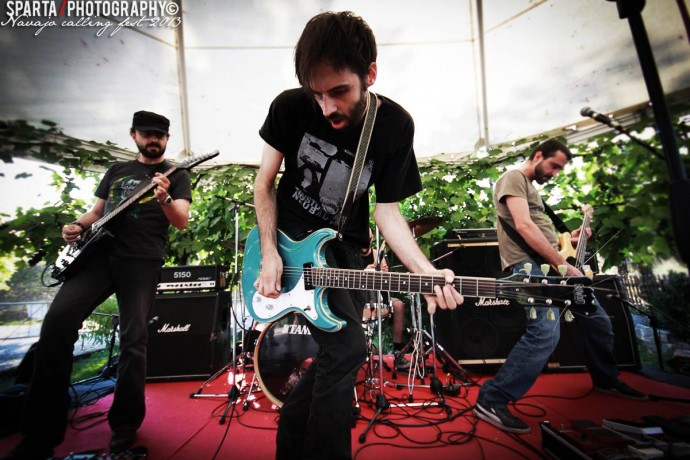 (Our Russian guest writer Comrade Aleks returns with a wide-ranging interview of the very articulate guitarist for an Italian doom band named Fangs of the Molossus.)

Fangs Of The Molossus are a psych-doom metal band from the Florence area. This bunch of doom-occultists have been doing their sinister deals since 2011, yet the band’s debut self-titled work was released only in July of 2013. Fangs Of The Molossus’ album represents some of most recognizable features of the Italian doom scene – the stuff sounds mystic, slow, and progressive, with that good well-known horror-vibe of the local scene.  Ancient Roman and Etruscan history and mythology, early 70’s horror movies, escapism conception, science fiction literature, a Beksinski painting, and a comic book by Hideshi Hin are all reflected in Fangs Of The Molossus songs. Count J. Vendetta (guitars) reveals some secrets of muscial occultism from Florence.

Hello Count Vendetta! Fangs Of The Molossus released a self-titled album in July of 2013. What has happened in the band’s life since that moment? Do you already concentrate on the writing of new stuff or still watch listeners’ reaction to the debut LP?

Hi, and thanks for contacting us: it’s always nice to get in touch with people from different places and with different cultural backgrounds. Since the self-produced album came out we have spent some time writing new material (three or four new songs, depending on how satisfied we will be in the end), we’ve played a few gigs with other Italian bands, like Caronte and Shinin’ Shade, and opened for Mondo Generator at Castellina Musica W, last August. Then the “I Drink Your Blood” single was released. The rest is recent history: trying to understand how to move for the second full-length release and considering some offers from small independent Italian labels. END_OF_DOCUMENT_TOKEN_TO_BE_REPLACED