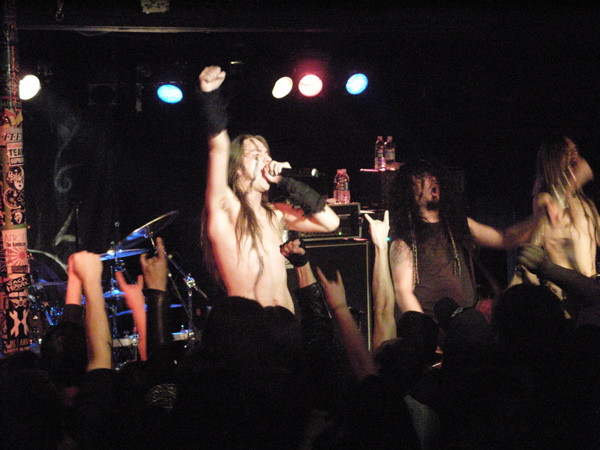 We got caught in a temporal vise. On one side was The Finnish Metal Tour 2010 at El Corazon in Seattle last night. Two of your NCS Co-Authors hit that up, and man, was it awesome! Finntroll (pictured above in one of our photos from last night), Moonsorrow, Swallow the Sun, and two very good local bands (7 Horns 7 Eyes and Blood and Thunder).

Those Finns don’t do half-measures. They all played long and late. We’re not complaining — but let’s just say it was the wee hours of the morning before we hit the rack. That’s one side of the temporal vise. And on the other side? The fucking day job. And the time in between the two just got squeezed down into a wafer-thin layer of almost nothingness. Certainly not enough time to finish messing with all the photos we took or to write our reactions to what we saw and heard.

So, to tide you over until tomorrow, when we can post our review and a batch of photos, we’re doing this: After the jump, we’ll post one photo from each of the Finnish band’s sets last night plus one album track to stream of a song from each of those sets. So, you’ll get songs from Swallow the Sun, Moonsorrow, and Finntroll to hear as you gaze at the photos — and imagine just how ridiculously good this concert was.  (all that, after the jump . . .) END_OF_DOCUMENT_TOKEN_TO_BE_REPLACED