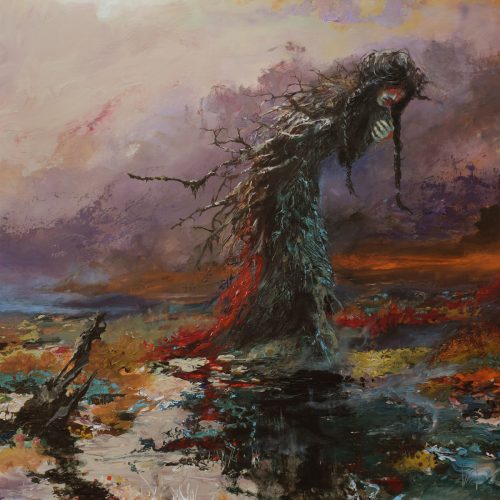 Nor for the first time, Adam Burke‘s cover painting was the first source of intrigue about this album. The intrigue deepened when I listened to what was publicly available at the time I first saw the painting. The music in many ways was pretty far afield of what we usually cover at this site, and maybe that was part of its attraction — the allure of something stylistically different, and yet in its own way just as dark, as bone-bruising, and as emotionally super-charged as the metal extremity that takes up most of our time here. Little did I know, even then, how intensely involving the complete album would be.

The album in question is …This Earth Shaped Tomb by the Florida band Gillian Carter. It’s their fifth full-length, a 15-track, 35-minute affair that proves to be a constantly changing and perpetually surprising juxtaposition of sounds and moods. It will be released on August 31st by Skeletal Lightning in North America and Moment of Collapse Records in Europe — and we have a full stream of it for you right now, preceded by bunch of spoilers. END_OF_DOCUMENT_TOKEN_TO_BE_REPLACED