I’ve spilled many words about Goatblood over the years in a seemingly endless quest to describe just how maliciously ruinous yet gripping their music is. I have another opportunity today, because we’re premiering a new two-part album named Blooddawn​/​Annihilation Of This World.

Hatred, disgust, and violence have always seemed to be the dominating inspirations for this malefic duo’s bestial black/death metal ministrations, the more willfully offensive the better. The music’s not ostentatious or pretentious — quite the opposite, which is part of its primeval appeal. All those ingredients are again present and accounted for in this new album, but the two halves of it nonetheless present slightly different takes on the band’s core malignancy of sound. END_OF_DOCUMENT_TOKEN_TO_BE_REPLACED

I’m leading off with “Shallow Graves“, because it so thoroughly swept me off my feet right from the start, thanks to the thrill of its opening riff, the pulse-pounding impact of the racing drums, and the grandeur of the panoramic cascades. The song changes, moving through a variety of rhythms and tempos as well as variations in the riffing that alters the moods, though the vocals are blisteringly intense at all times. END_OF_DOCUMENT_TOKEN_TO_BE_REPLACED 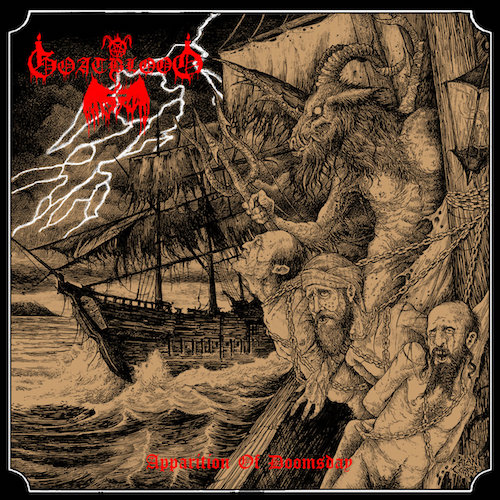 Two years ago when we premiered a demo by these two German devastators we wrote:

“There is little risk that you will be deceived about the music we’re about to present. The band’s name is Goatblood. The demo is named Gasmask Devastation Terror. The artwork depicts a bullet-draped demonic form shrouded in eldritch energies and fire. Biohazard and radiation warning signs would probably have been superfluous….

“Their brand of black/death metal is lo-fi filth, a toxic and insidious stew of grim, buzzing riffs, pounding chords, and muffled, clattering percussion. Solos leap from this morass of malignancy like crazed vipers made of flame and plutonium. The vocals are a roaring, shrieking horror — merciless and hollow-hearted….

“Goatblood haven’t forgotten the appeal of dynamics — but they also never lose sight of their lethal mission, which is to assault the senses and mangle the mind until it can see nothing but an apocalyptic wasteland.”

Since we wrote those words, Goatblood have released a 2018 EP (Arma Inferre), and now they’re on the verge of discharging their third full-length through Dunkelheit Produktionen. Fittingly entitled Apparition of Doomsday, it will bury the old year on December 27th — but we have a full stream of all its multifarious and nefarious depredations today. END_OF_DOCUMENT_TOKEN_TO_BE_REPLACED 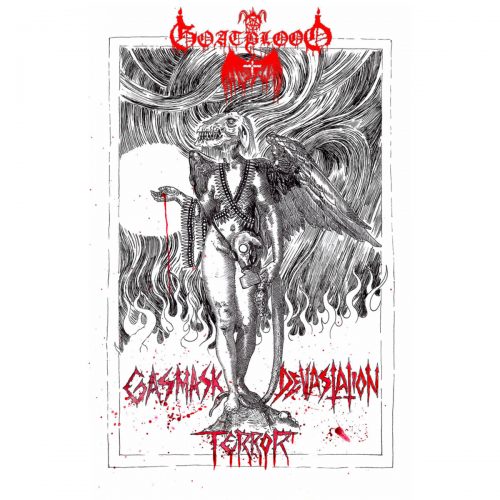 There is little risk that you will be deceived about the music we’re about to present. The band’s name is Goatblood. The demo is named Gasmask Devastation Terror. The artwork depicts a bullet-draped demonic form shrouded in eldritch energies and fire. Biohazard and radiation warning signs would probably have been superfluous.

As fears of nuclear devastation rise again after decades of dormancy, the release of Gasmask Devastation Terror is perhaps an example of being in the right place at the right time. On September 18th, thanks to Dunkelheit Produktionen, we can begin practicing for incineration. END_OF_DOCUMENT_TOKEN_TO_BE_REPLACED