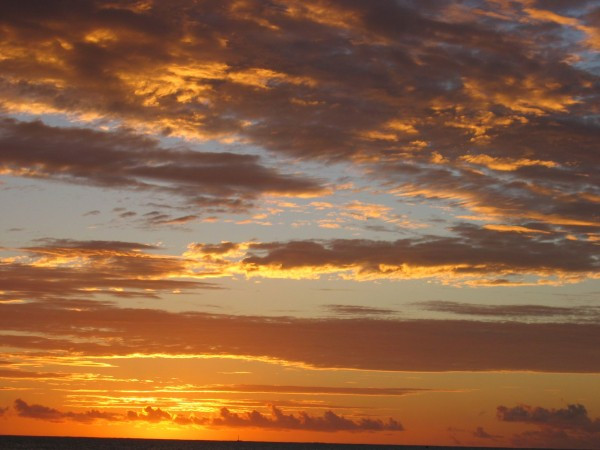 I like vacations. First, there is very little working. Very little working is a good thing. I would be very happy with very little working from now until the end of time as I know it. Second, there is very much eating, drinking, and sleeping. These are also good things. I could do them until the end of time as I know it, until I become one of those people who gets so enormously fat and atrophied that emergency workers have to bust down the wall of the house and use a crane just to remove the corpse after the last filthy breath of life has passed the lips.

Third, if I am a good boy and play my cards right, there may be carnal activity with Mrs. Islander in between bouts of eating, drinking, and sleeping. Fourth, there will be beautiful clouds, of which I will take many photos during the few hours when I am awake, some of which I will share with you, because having your head in the clouds is a good thing and should be experienced more frequently.

Fifth, vacations are an excuse for me to solicit guest posts for NCS, of which I have received many already. You’ve seen some of them already this week, even though I have not yet left on vacation but instead have been working like a fucking orc under the heavy whip hand of the Dark Lord of Mordor. But what you’ve seen this week is just the tip of the iceberg — there are some juicy ones coming your way in the weeks ahead (in addition to new material from Andy Synn, BadWolf, and TheMadIsraeli). And by the way, there is still time to send me guest posts, so don’t be bashful.

Yes, I will still have some limited time for blogging activity, such as the time necessary to format and post guest pieces and maybe even to write some quick things myself. However, I am not going to push my luck with blogging time between now and my return to the NCS metallic island on Nov 18 (see note above re being a good boy, in hopes of carnal activity with Mrs. Islander).

So, with this post I bid you all a fond farewell.  Before this day is out, I will be winging my way to a distant land where life is sloooooow and there will be eating, drinking, sleeping, clouds, and perhaps carnal activity. I leave you with a random collection of music I missed while working like an orc over the past week: After the jump, new/newish videos from Vildhjarta (Sweden), Bury Your Dead (U.S.), and Exhumed (U.S.), and a new song from GoreGazm (South Africa). END_OF_DOCUMENT_TOKEN_TO_BE_REPLACED