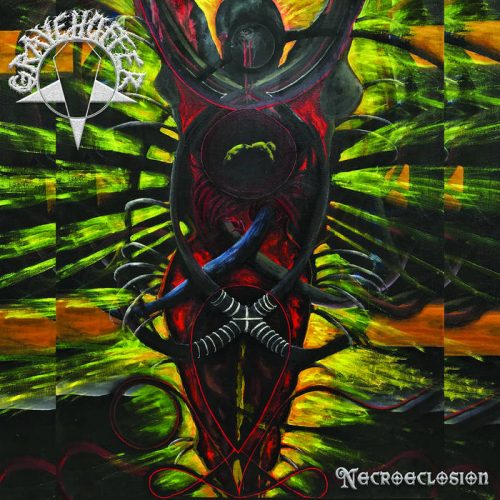 (We welcome Nathan Ferreira, who has been reviewing metal for close to a decade at various locations, including MetalBite, and whose first NCS review focuses on the new album by the Missouri band Gravehuffer, which is set for release by Black Doomba Records on January 15th.)

Remember when shows were a thing? Particularly the dim-lit, greasy dive-bar shows that you and maybe thirty other people attended, including the band members? Sure, some of the bands needed tightening up, or their songs were just unmemorable and all over the place, but there’s a certain personality that unknown locals have that resonates with you for some time. There’s something so endearing about local nobodies spending years together crafting their inaccessible, odd visions, creating something purely for their own love of all things loud and strange. That alone makes you want to like the music more, but I think it also serves as a better incubator to make something unique, free from the demands of the public or the need to satisfy anyone’s desires besides their own.

Gravehuffer is the apex of such scrappy local acts. They look like four dads who’ve been working the same soul-sucking jobs for 20 years, their band the only refuge from a bleak and monotonous reality. They slam genres together with reckless abandon and have a loose, jam-session feel to a lot of their songs, tying moments together with big, meaty riffs and stripping down the structures with crusty, d-beat heavy drums. Their building blocks are simple and you’d never call these guys virtuosos at their respective instruments, but the magic is in how they tie it all together. END_OF_DOCUMENT_TOKEN_TO_BE_REPLACED