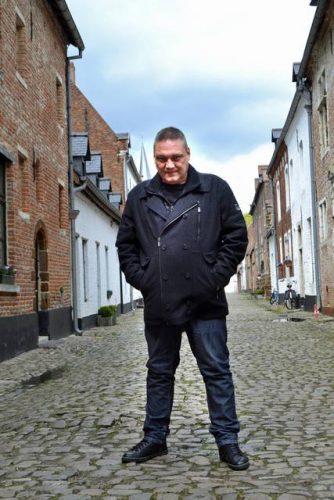 (Greek writer Aggelos Redneck of Rockoverdose.gr brings us this interview of Gunther Theys, founder and still vocalist of the long-running Belgian black metal band Ancient Rites, whose latest album Laguz was released after a long hiatus in 2015. The interview was conducted in anticipation of Ancient Rites’ performance at the Arcane Angels Festival, which will take place in Athens on September 16-17, 2017, alongside such bands as Primordial, Taake, and Zemial.)

First of all, we’d like to know your thoughts on the latest album of the band Laguz”. It’s been two and a half years already since its release. How did the fans react to it? Are you fully satisfied with its sound?

I think Laguz is our most complex album so far from a technical point of view, consisting of many layers. It’s an album that has to grow on the listener, as one keeps on discovering details. On the other hand, all musical elements have intensified, it is an intense album. The fans responded positively, but of course people have their preferences, which is normal when a band exists for as long as we do and each album sounds different.

What I find important is that the essence of our work, the A.R. universe, remains intact. Like a travel through old, forgotten worlds. I still believe in every album we ever did for they all represent important eras in our band’s history. Our musical progress is a natural, organic one, but I wouldn’t mind releasing a very raw, primitive album either. We never plan our sound, we are not influenced by any current trends or external situations. We simply create what we feel, regardless of any commercial feedback. END_OF_DOCUMENT_TOKEN_TO_BE_REPLACED