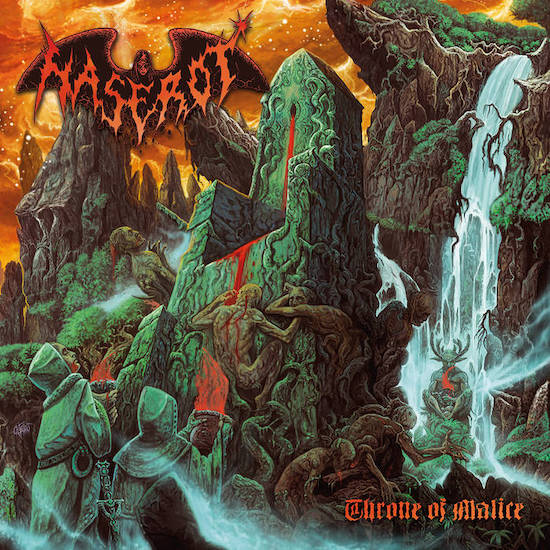 The Houston death metal band Haserot named themselves after an ominous statue seated on a marble gravestone in Cleveland’s Lakeview Cemetery; perched on the tomb of Francis Haserot and his family, it’s also referred to as “The Angel of Death Victorious”. Once you’ve seen that statue (and you can see it here), you won’t forget it. Once you hear Haserot‘s new EP Throne of Malice, it’s unlikely you’ll forget it either.

Haserot are a relatively new group, having come together in the last pre-pandemic year, but they have a veteran line-up that includes current or former members of Doomstress, Funeral Blues, Sanctus Bellum, Spectral Manifest, and Scrollkeeper. The experience shows in both the songwriting and the execution of this new EP.

The influence of ’90s death metal in the vein of Morbid Angel, Entombed, Bloodbath, and Carcass are evident, but the music hits like a combination of meteor strike and bulldozer rather than a rote repetition of what you’ve already heard before. It’s both a powerful reminder of what we loved about the past and a skull-cleaving, heart-palpitating illustration of what you miss if you confine yourself only to the old classics.

We have a riveting example of this point in the first single from the EP that we’re premiering today in advance of its May 27 release by Redefining Darkness Records. Its name is “Incantations At Dusk“. END_OF_DOCUMENT_TOKEN_TO_BE_REPLACED