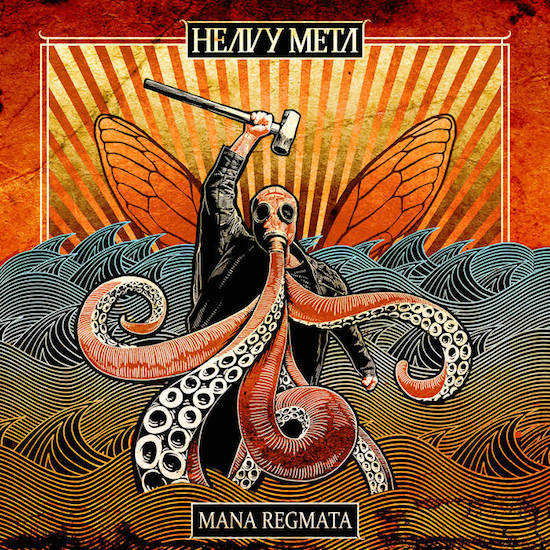 Just because New Year’s Eve is now in our rearview mirror doesn’t mean we have to stop with the fireworks displays, and man, have we got a musical fireworks display queued up for you today, one that will pop eyes, drop jaws, and leave listeners in a state of (perhaps deranged) joy.

The source of the head-spinning adventure that awaits you is a track from the debut album by Heavy Meta (no, that’s not a typo) from Lowell, Massachusetts. Mana Regmata is the name of this mind-scrambling full-length, and it’s set for release on February 11th. It defies genre categorization because it pulls from so many different wells, both metal and not-metal. The band themselves, with tongues in cheeks, brand it as “blackened progressive cowboy nintendocore”, which is really just a way of signifying that labels don’t make much sense here.

Further evidence of that (apart from the music itself) can be found in PR materials for the album that are making the rounds, which ask you to imagine what would happen if Sikth joined forces with Every Time I Die, Botch, Voivod, Mr. Bungle, Dillinger Escape Plan, and Rush, while also dropping references to Candiria, Faith No More, Converge, Atheist, King Crimson, Coroner, Boss Keloid, and Abigor. END_OF_DOCUMENT_TOKEN_TO_BE_REPLACED