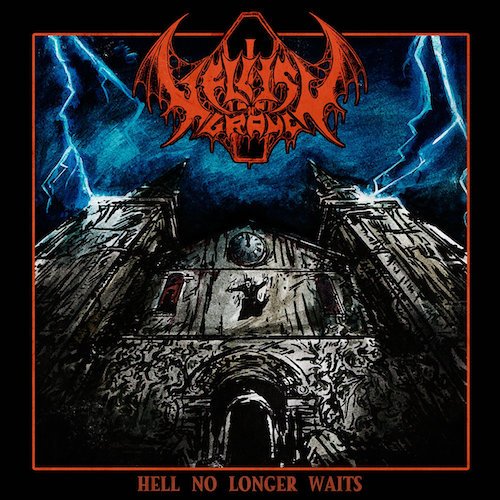 Writing about any song on Hellish Grave‘s new album, Hell No Longer Waits, inevitably involves spoilers, because they’re all so surprising. The music has a backbone of racing, riotous black thrash, packed to the gills with pulse-pounding riffs and head-hammering rhythms, but as good as this Brazilian band are at pulling out the stops and getting our adrenaline surging, they’re obviously not satisfied with that alone. They’ve obviously got other musical interests and influences, and in their songwriting they’ve given free reign to them, which makes this album stand out from the usual black thrashing barbarism of most of their peers.

Hell No Longer Waits will be released on May 31st by Helldprod. One song from the album, “Macabre Worship“, has already debuted. If you’ve heard it, you’ll already understand what I’m talking about. If you haven’t, you’ll get your chance down below. And on top of that spectacular song we’re now adding another — the title track. If you want to be surprised (as well as invigorated, like stepping on a live power line), just go straight to the streams and enjoy them. If you don’t mind spoilers, read on. END_OF_DOCUMENT_TOKEN_TO_BE_REPLACED