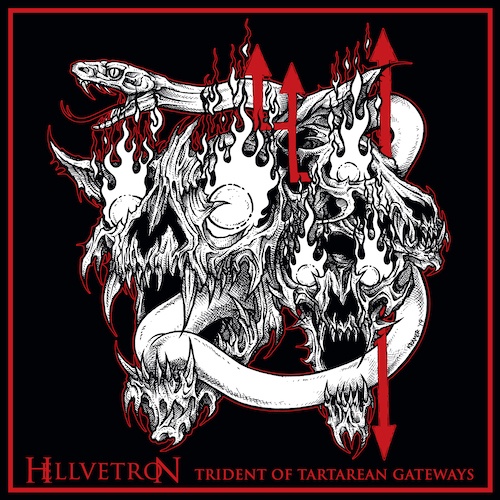 Fear and dread, and a certain tingling up and down the spine, are perhaps the dominant sensations that should accompany the announcement of a new album by the Texas duo Hellvetron, whose members have also wrecked havoc through such other formations as Nexul and Black Witchery. Seven long years have passed since Hellvetron’s debut album, Death Scroll of Seven Hells and Its Infernal Majesties, but at last a new one will be upon us come August 16th, through the devilish ministrations of Iron Bonehead Productions.

The portals of Hell open wide through this new album, whose title — Trident of Tartarean Gateways — foreshadows the sulfurous abominations and terrible majesties that reveal themselves through its nine tracks. Similarly, the title of the song we present today — “Draconian Witchblood” — presages both the severity of the punishment it metes out and its air of poisonous enchantment. END_OF_DOCUMENT_TOKEN_TO_BE_REPLACED