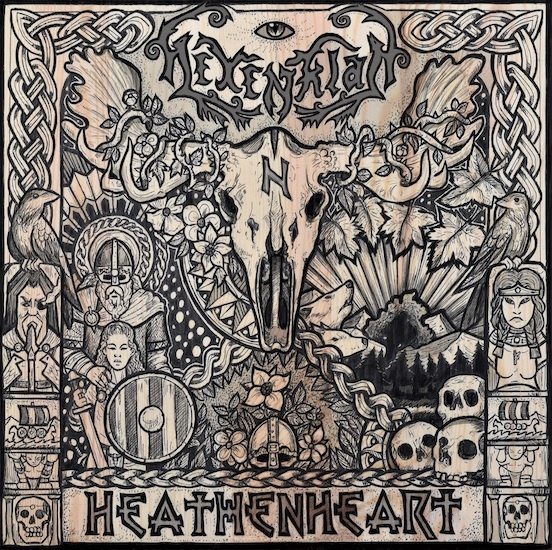 At 13 tracks and an hour of music, Hexenklad’s recently released second album Heathenheart is a substantial body of work, and a wide-ranging one. Although “folk/black metal” or “pagan metal” are genre labels you might see attached to the band, Heathenheart moves among episodes of wintry blackened moodiness, warlike savagery, grand pageantry, acoustic folk tales, and a lot more.

As the band themselves report from Ontario, “From the coldness and rawness found in Black Metal to the uplifting and memorable melodies found in Folk Metal, to the hooks and choruses found in Heavy Metal,” the record is a broad representation of the members’ varied influences and personalities, and it brings to mind bands such as Moonsorrow and Dissection, Primordial and Insomnium.

Among all the varying experiences offered by the album, the title track is one that’s truly moving and inspiring, and it’s the subject of a riveting guitar playthrough video that we’re premiering today, which focuses on the talents of Hexenklad guitarist John Chalmers. END_OF_DOCUMENT_TOKEN_TO_BE_REPLACED