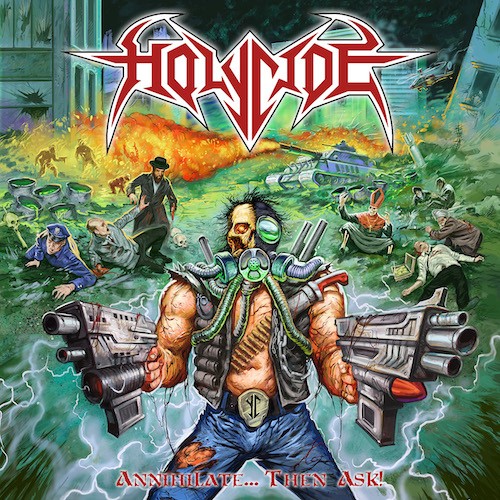 The slaughter of all faiths… and the law… and greedy cash-hoarders. Open vats of radioactive slime. Flame-throwing tank attacks and skulls burned clean to the bone… and a tooled-up mutant coming for you next. The artwork by Andrei Bouzikov (Municipal Waste, Skeletonwitch, Toxic Holocaust, etc.) sends a message, and the album title reaffirms it: Annihilate… Then Ask!

This is the debut album by Spain’s Holycide, a band originally conceived in 2004 by Avulsed’s Dave Rotten that eventually came to include guitarist Miguel Bárez, bass-player Dani Fernández, drummer Jorge Utrera, and guitarist Salva Esteban. They released their first EP, Toxic Mutation, through Xtreem Music in 2015, and now comes this new full-length with the war-torn artwork. Does the music live up to the carnage emblazoned on the cover? In a word, hell yes.

Okay, that was two words. Here are some more words, as an introduction to the album stream that we’re helping spread around today. END_OF_DOCUMENT_TOKEN_TO_BE_REPLACED