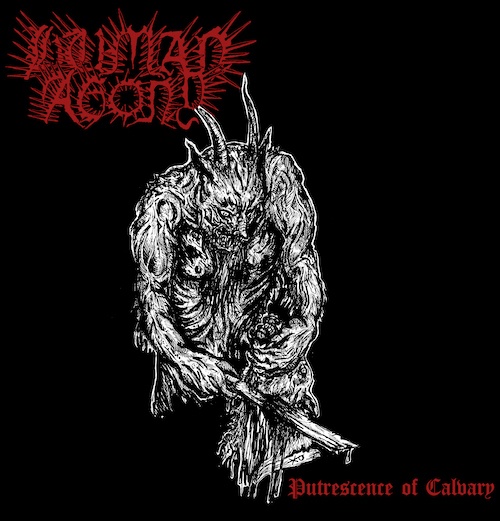 Black Friday is of course a celebration of cannibalistic commercialism, a paroxysm of merchants and consumers crashing together in a frenzied effort by the former to loot the bank accounts of the latter, and of the latter to claw at the former (and each other) in an effort to save while spending. But Black Friday has a different meaning for some of us. We can bend the meaning of the name into a different kind of standard, a different representation of cannibalistic war-zone frenzy. Which brings us to Human Agony.

Today is the day on which Invictus Productions is releasing the debut album of these satanic devastators from Victoria, British Columbia. Not for naught does the advance press for Putrescence of Calvary make reference to the likes of Conqueror, Revenge, Black Witchery, and Blasphemy. If you are adherents to such standard-bearers of bestial black/death, you’ll relish being torn limb from limb by what Human Agony are doing — and we’ll give you that chance through our premiere of a full album stream. END_OF_DOCUMENT_TOKEN_TO_BE_REPLACED