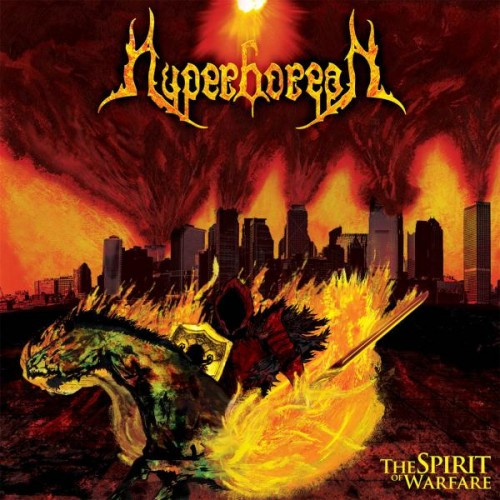 Hyperborean is a three-man melodic black metal band from Sweden.  Although the band came into being more than a decade ago, they didn’t release a debut album (on Abyss Records) until last year, following three demos recorded between 2002 and 2005. Despite having the chance for an advance listen to that album (The Spirit of Warfare) and later seeing an 8-out-of-10 review of it in Decibel magazine, I failed to seize the opportunity.

I have a bad habit of constantly moving on to the next new thing, trying to keep this site current or even ahead of the release curve, and spending almost no time going back to music I missed when it was new. And so it was with The Spirit of Warfare. But yesterday I came across a fan-created video that drove me to learn more about the band and has convinced me to make time for the album amidst the sea of new promos and releases.

The video combines a song from The Spirit of Warfare with excerpts from Zack Snyder’s 2007 movie version of Frank Miller’s comic book mini-series, 300. It’s not the first time someone has used excerpts from 300 as visuals for a metal song, but this combination is especially fitting because the Hyperborean song (clocking in at almost 10 minutes) is “The Last Stand of Leonidas and the Battle of Thermopylae”. It’s also a thoroughly winning combination.

Hyperborean aren’t a typical Scandinavian black metal band. They seem to have no use for the usual trappings of corpse paint and spikes, and their songs aren’t devoted to satanic or occult or pagan subjects. Instead, The Spirit of Warfare takes its inspiration from the historical record of human violence, with references in the well-written lyrics (available here) to the World Wars and, of course, to the stand of the 300 Spartans against Xerxes’ army at the pass of Thermopylae. END_OF_DOCUMENT_TOKEN_TO_BE_REPLACED