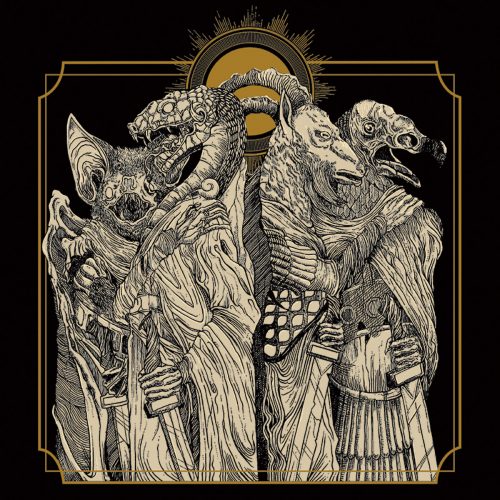 Tetrabestiarchy is the new album by the Italian black metal band Idolatria. It is book-ended by intro and outro tracks that are thematically and musically more significant than such tracks often are. Between them are four songs, each of them named for animals that occupy places in the myths of various cultures and that have also been associated with Satan as tools for the annihilation of other religions. The song titles give these creatures an arcane significance beyond their presence as features of the natural world. We are told this about what inspired such references:

“The descriptions of these four animals are inspired by a porphyry sculpture, dating from around 300 AD, called The Portrait of the Four Tetrarchs. It depicts the four rulers in charge of the entire Empire, instituted by Emperor Diocletian. The sculptural group has been fixed to a corner of the façade of St Mark’s Basilica in Venice, Italy since the Middle Ages. It probably originally formed part of the decorations of the Philadelphion in Constantinople, and was removed to Venice in 1204 or soon after.”

One of the four animals in this Tetrabestiarchy is the noctule — a name given to various species of vesper bats found in Europe and Asia, some of them golden in color. And it is the Idolatria song devoted to the noctule that we’re premiering today. END_OF_DOCUMENT_TOKEN_TO_BE_REPLACED